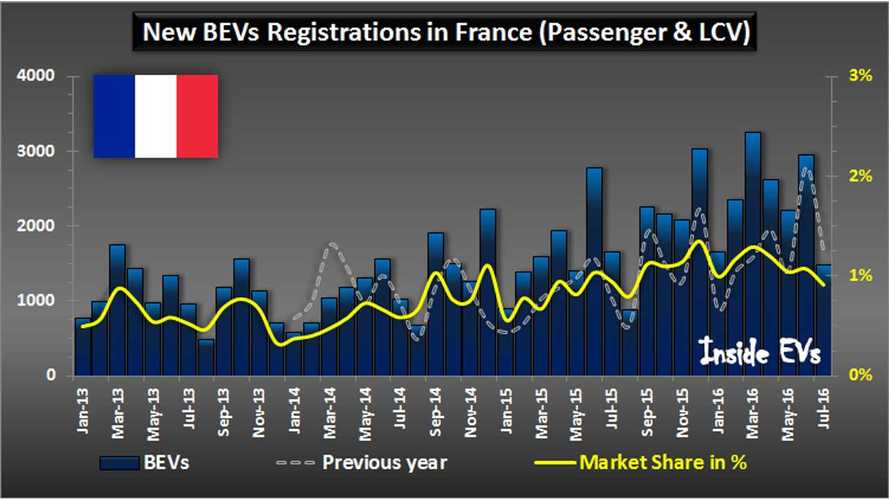 After a slow down in June, all-electric car sales in France decreased year-over-year in July. It's the second hit to European BEV sales this month alongside Norway.

New BEV registrations amounted 1,488 (which was down 10.8%), which ends a period of 20 consecutive months of growth.

Splitting the demos a little further we find that passenger BEVs moved down 18% to 1,065, while light commercial vehicles went up 15% to 423.

The market share of all-electric cars also decreased to 0.92%, while passenger BEVs to 0.8%. The first time France has been below 1% in 11 months.

In total, more than 16,500 all-electric vehicles have still been sold in France over the first seven months - which is 41.5% more than year ago.

As in most months, French electric car sales move up or down because of one model - the Renault ZOE.   For July, ZOE sales fell by 30% to 488.  While the second best seller, the Nissan LEAF fell 35% to 155 units registered.

In third place for sales in France we find a tie:  84 BMW i3 (including REx) sold, as well as 84 Citroën e-Meharis.  The best selling electric LCV (as always) was the Renault Kangoo Z.E. - 190 in July.

When it comes to Renault and its EVs, most eyes in France (and Europe) are now solidly fixed on the Paris Motor Show (or Mondial de l'Automobile if you will) which kicks off in early October, where Renault is expected to make a big splash with new EV products.

Editor's Note:  Because we know of the intense interest in Tesla, we will also note sales of the Model S - at 41 units, the Model X just missed making its first delivery in July.