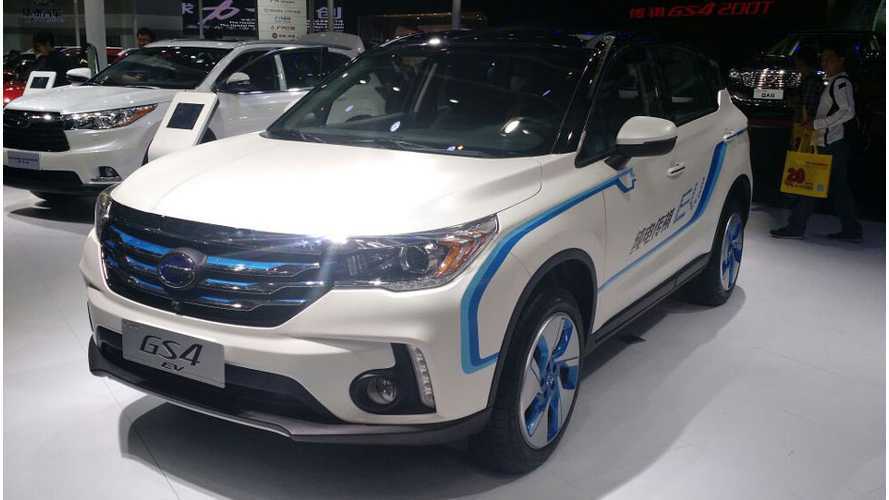 China surely has the largest market of electric cars in the world - almost 350,000 plug-ins sold through October (details). Partially due to the fact the government offers up to the equivalent of $13,000 to those purchasing emission free vehicles, as well as some strict emission regulations in major cities.

Sales of Plug-In Vehicles in China – through October 2016

Most of China's EVs come from local automakers, and most of the vehicles are only available within the country. Due to the surge, recent company ramp ups are contributing to longer range, increased power, and thus, growing consumer interest.

In China, "green" is not a standard color when it comes to EVs.

Tycho de Feijter, founder of CarNews China, notes that EVs are known as "blue" cars in the country, likely due to turning the smog colored sky back to its original blue. As you can see in the photos below, EVs boast blue trims and features and are also adorned with interesting EV stickers and icons.

Guangzhou's Trumchi GS4 is a top-selling small SUV. The company is hoping that the EV version will catch on as well. It will travel about 150 miles on a charge. The SUV should be available around the second quarter, at a price of 150,00 yaun ($21,690 USD).

Forbes notes that vans may be a popular EV option for China. They can be used by companies for freight or passengers. Carpooling is important in a country with so many vehicles on the road. Despite its large size (12 passengers!), the Sunray will travel about 100 miles. Price and release date were not disclosed, but it will be released sometime in 2017.

Vans are more popular in China than light trucks, however, with the range and horsepower increase, they are catching on. Note ... these are not light trucks like the Honda Ridgeline or the Chevy Colorado, but rather small commercial trucks. The Qiyun EV can travel 124 miles and haul 6,600 pounds. It will go on sale next year for 100,000 yan ($14,450 USD).

Keep in mind that although China offers such a large incentive for the purchase of NEVs, unfortunately, it would not make some of these vehicles free! The incentive program seems somewhat complicated, but basically it is based on battery size and vehicle cost. For instance, the government may offer up to $9,000 toward the purchase of a moderately-priced passenger vehicle, and as much as $80,000 has been awarded to companies purchasing much more expensive electric buses.