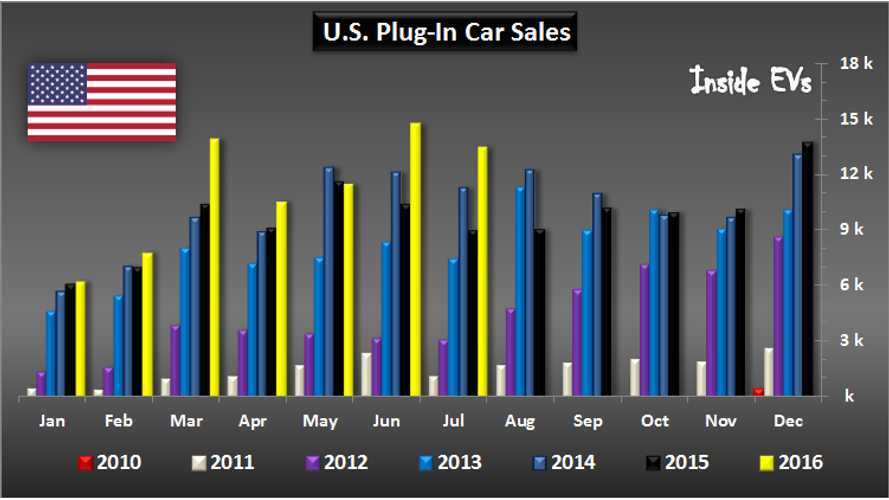 As we enter the second half of the year, mostly good news is coming from the plug-in car market in the U.S. which has been logging strong gains of late.

13,432 sales were reported for July, which is 50% more year-over-year, and the 3rd best result ever, as well as best July ever.

EV Market share in July was 0.88%, which was the second best result ever.  As a result, the average market share for the year also increased to 0.77%, and is expected to grow further in near term as 2nd half plug-in sales in the US are always much stronger.

We should note that while other countries struggle to grow both all-electrics and PHEVs at the same time, both are growing at a decent pace in the US - mostly on the back of strong domestic all-electric sales from Tesla (with the Model S and Model X), and on the plug-in hybrid side from GM (which sold a new 2016 record 2,406 Volts in July), and Ford (2,096 sales of the Fusion and C-Max Energi in July).

The US market now impatiently waits for new 2017 models and battery options to hit the market shortly, which we hope will leverage the sales to unseen new levels.

Also of interest:  Check out the month-to-month (and yearly) sales of all plug-in models sold in the US since the start of the current "EV revolution" in 2011 on our "Monthly Plug-In Scorecard" here.