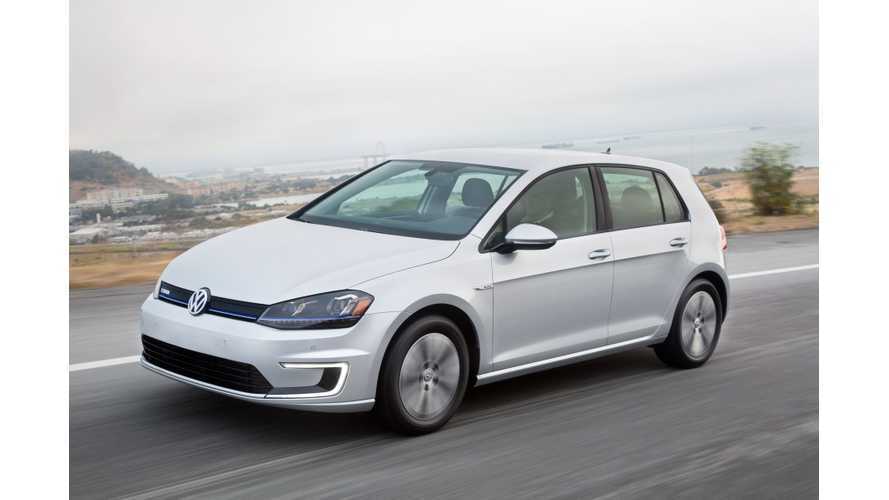 Bengt Halvorson shared an interesting article about the real world range of 2015 Volkswagen e-Golf after nearly 2,700 miles (over 4,300 km).

With a new 35.8 kWh, longer range e-Golf (~124 miles) arriving later this year, we thought this would be a good opportunity to re-visit the original plug-in, all-electric Golf...as surely the remaining new/older model can be 'had for a song' in the near future.

A strong point of the e-Golf driving experience is the fairly accurate dashboard estimates on the remaining range...which is quite a rarity these days.

"...trip computer unfailingly suggested a remaining range that was maybe slightly less than what was actually remaining, and nearly as linear as a fuel-range estimation for a gasoline car"

In normal conditions it was "quite easy" to do more than 80 miles on a charge. With the highest actual range achieved coming in at about 108 miles / 174 km (+3 remaining), and around 110 miles on two other occasions.  Overall the 100 mile mark was crossed six times over the first ~3,000 miles, so hitting triple digits was no fluke.

Conversely, the lowest return result stood at 58 miles (93 km), but at the time it was just 30°F (-1°C) with heating on/travelling at 70 mph - basically the "death" scenario for an all-electric vehicle.

Energy consumption overall came in at around 3.7 miles per kWh in mostly city driving (which was on par with EPA estimated 3.74 miles per kWh, and 3.12 miles per kWh on the highway).

"Over nearly 2,700 miles with the e-Golf (probably all but about 300 miles spent in city driving) we saw an average of 3.7 miles per kwh, according to the weighted average of three stretches with the trip computer (one reset accidentally, the other when we brought the vehicle in for service)."