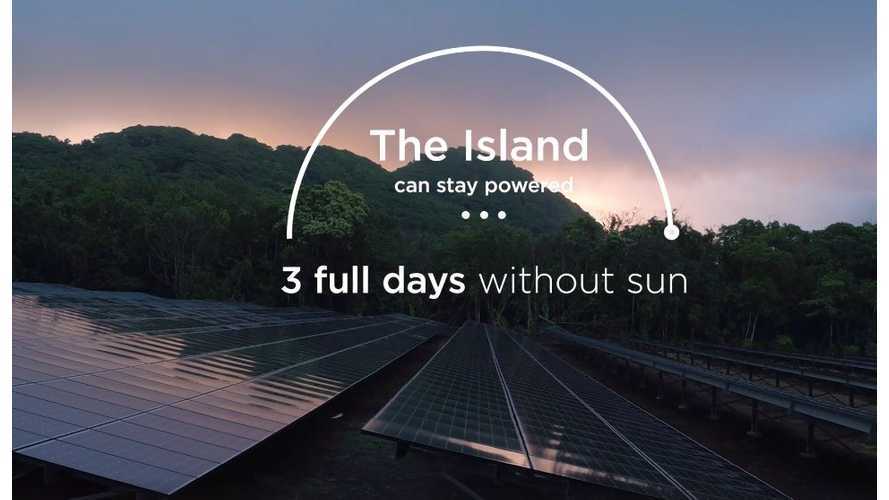 The Ta'u island in American Samoa used to be powered with diesel generators, burning 300 gallons of fuel (109,500 gallons a year).

Today, it now runs on nearly 100% solar energy thanks to 5,328 solar panels from SolarCity & 60 Tesla Powerpacks.

The 1.4 megawatt microgrid (over 6 MWh of storage) can cover the electrical needs of the 600 residents of  Ta'u, and can operate independently without sunlight for ~3 days.

"The island of Ta’u in American Samoa, located more than 4,000 miles from the West Coast of the United States, now hosts a solar power and battery storage-enabled microgrid that can supply nearly 100 percent of the island’s power needs from renewable energy. This provides a cost-saving alternative to diesel, removing the hazards of power intermittency and making outages a thing of the past."

Below: SolarCity also added some further information on the project:

Island in the Sun

There are challenges to living on a remote island – from food scarcity to destructive weather – and the lack of affordable, reliable power is among the greatest. The island of Ta’u in American Samoa, located more than 4,000 miles from the West Coast of the United States, is no stranger to power rationing and outages.

“I recall a time they weren’t able to get the boat out here for two months,” said Keith Ahsoon, a local resident whose family owns one of the food stores on the island. “We rely on that boat for everything, including importing diesel for the generators for all of our electricity. Once diesel gets low, we try to save it by using it only for mornings and afternoons. Water systems here also use pumps, everyone in the village uses and depends on that. It’s hard to live not knowing what’s going to happen. I remember growing up using candlelight. And now, in 2016, we were still experiencing the same problems.”

The situation is changing. Ta’u now hosts a solar power and battery storage-enabled microgrid that can supply nearly 100 percent of the island’s power needs from renewable energy, providing a cost-saving alternative to diesel, removing the hazards of power intermittency and making outages a thing of the past.

The microgrid – 1.4 megawatts of solar generation capacity from SolarCity and Tesla and 6 megawatt hours of battery storage from 60 Tesla Powerpacks – was implemented within just one year from start to finish.

Its benefits are life changing for residents of Ta’u. The local hospital, high school and elementary schools, fire and police stations and local businesses no longer need to worry about outages or rationing. But the biggest advantage is cost: Tau’s microgrid replaces diesel generators with more affordable solar energy, and is designed to optimize system performance and maximize savings.

“It’s always sunny out here, and harvesting that energy from the sun will make me sleep a lot more comfortably at night, just knowing I’ll be able to serve my customers,” said Ahsoon.

Like Ta’u, many communities across the globe use diesel as their main source of power. Today, microgrid solutions featuring solar power and energy storage cost less than diesel almost anywhere in the world and are a cleaner, safer alternative. Solar and storage systems also eliminate expenses and issues associated with shipping diesel and provide stable power costs for decades, unlike fluctuating fossil fuel prices – all by simply switching to the power of the sun.

The stability and affordability of power from the new Ta’u microgrid, operated by American Samoa Power Authority, provides energy independence for the nearly 600 residents of Ta’u. The battery system also allows the island to use stored solar energy at night, meaning renewable energy is available for use around the clock.

60 Tesla Powerpacks - good for more than 6 MWh of storage

The project was funded by the American Samoa Economic Development Authority, the Environmental Protection Agency, and the Department of Interior, and is expected to allow the island to save significantly on energy costs. The system is expected to offset the use of more than 109,500 gallons of diesel per year. Factoring in the escalating cost of fuel, along with transporting such mass quantities to the small island, the financial impact is substantial.

“This is part of making history. This project will help lessen the carbon footprint of the world. Living on an island, you experience global warming firsthand. Beach erosions and other noticeable changes are a part of life here. It’s a serious problem, and this project will hopefully set a good example for everyone else to follow,” said Ahsoon.

Ta’u is not a postcard from the future, it’s a snapshot of what is possible right now. Renewable power is an economical, practical solution for a growing number of locations and energy needs, and islands that have traditionally relied on fossil fuels can easily transition to microgrids powered by solar and storage today.

To learn more about microgrid options for your community, please complete the form below and our team will contact you directly.