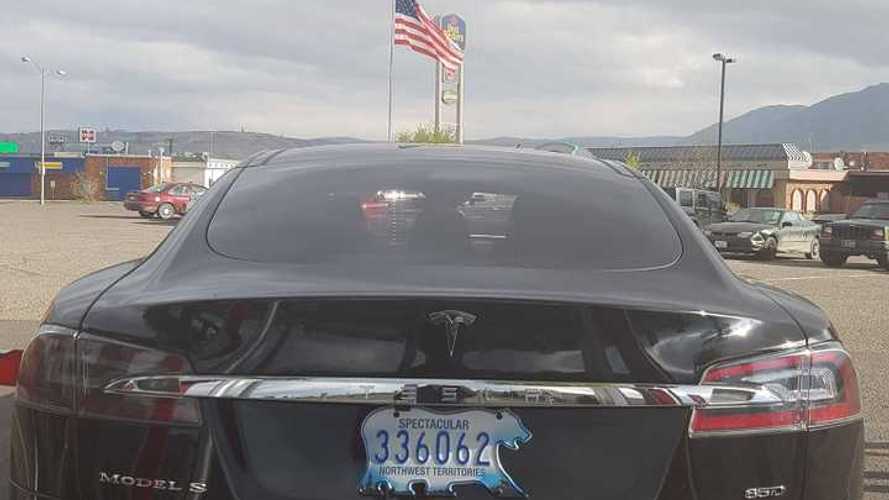 Lisa and James Locke, proud Tesla Model S owners from Sooke, British Colombia on Vancouver Island, shared their love of Tesla and their road trip experiences with Tesla Motors. They named their Model S the "Polar Express" as it is the first Tesla on the planet with the Northwest Territories (NWT) polar bear license plate. The couple took the Polar Express to Hay River, NWT, marking the first known time a Tesla has ever crossed the 60th parallel in North America.

The Lockes took an interest in electric vehicles about two years ago and purchased a Nissan LEAF. James pointed out that this vehicle will be replaced by their upcoming Model 3.

The decision to purchase a Tesla Model S and future plans for a Model 3 came after Elon Musk announced Autopilot and Dual Motors. This coupled with the electric car's long range, safe operation in cold climates and the Tesla Ranger program for service, piqued the Locke's interest.

However, James explained that it wasn't until Tesla visited and offered test drives, that he and Lisa were sold. He said:

"Who couldn’t be, the car sells itself! When the order was placed it was like Christmas for the 6 weeks waiting until delivery. I’ve never had so much anticipation for any purchase in my life. I must have read the entire manual several times and watched all the videos multiple times before the delivery day."

The couple, who had never been road trippers before, has now accumulated 70,000 km (almost 44,000 miles) in the first year. They are part of a community of Tesla owners that travel and blog about their adventures. Lisa is also editor of Victoria EV Club. James and Lisa have crossed the United States twice and were part of Tesla Road Trip 2016 trip to Williamsburg, Virginia this year that attracted record amounts of electric cars. James recounts another trip:

"I think the proudest moment for me personally is the day we drove our Tesla to Hay River, NWT. We are the first to get a Tesla North of the 60th Parallel in North America. It was an amazing feeling to bring such a new technology to the North. We’re also the first to have a Tesla charger in the NWT. It was so much fun to see the look on so many people's faces that I took for test drives!"

Although the car was very expensive for the Locke's budget, James said that he has no regrets. In the first year the couple has recorded a fuel savings of over $12,000. He concluded:

"I can see the day in the near future when more EVs are on Northern roads and driving the future to sustainable transport coast to coast to coast. I can now see the day, not so far from now I can hop in my Tesla Model S and it will take me to the NWT without touching anything. I could work or sleep and the car will safely take me to my destination. The future is now and I can’t wait to see where it takes us next!"