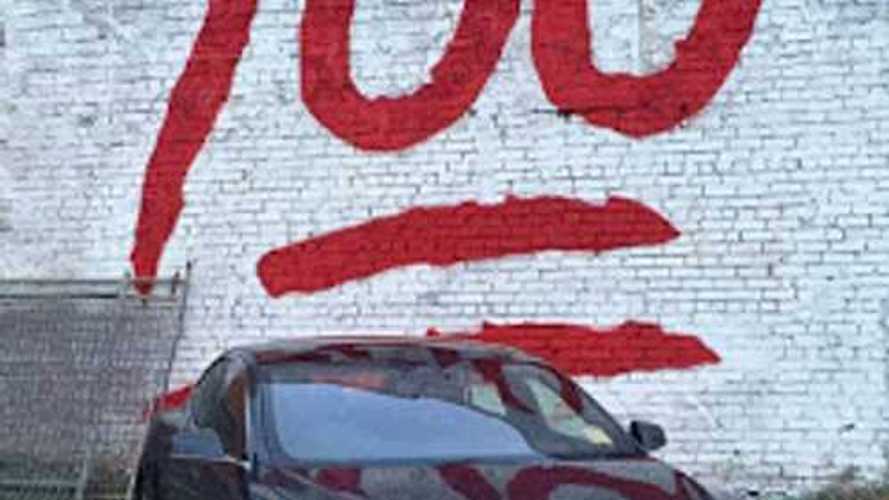 Tesla and Elon Musk are notorious for providing teasers and baiting the public to keep it exciting.

A post recently appeared on the company's Facebook page that is certainly causing a stir at the moment. It was a picture of a Model S with a large painted "100" in the background.  But what does it mean?  Over 150 comments of speculation have already sprung up on the thread - as well as at the TeslaMotorsClub forum (here) and other online venues.

Is this foreshadowing the upcoming release of a new Model S P100D?

It is surely possible that we may see the model with a 100 kWh battery at some point soon. The original Model S had a 60 kWh or 85 kWh battery and since has been upgraded. A 70 kWh battery became available, followed by a 90, so jumping to 100 seems the logical next step.

Also we heard via a "hacker" that Tesla had already squirreled away a "P100D" into its code DNA.  Notice of the heck got as high as Elon Musk, and he did not take the opportunity to dispute the arrival of a 100 kWh Tesla, only said that "good hacking was a gift"

What else could Tesla be trying to tell us?

Back in December 2015, it was estimated that Tesla may have finally sold 100,000 Model S sedans. However, this information has yet to be officially confirmed. Months have passed since this preliminary data was reported, so at this point, we are well past the 100k mark.   Of note: The picture does not include the newly refreshed Model S. An older model in the picture may be pointing more toward this explanation.

If the Model S P100D does hit the streets, it could boast about 325 miles of range (as the 90D just passed 300 miles on the highway portion of the EPA test). Either way, kudos to whatever it is Tesla is trying to tell us. We should know soon enough.

It is just a (relatively obscure) emoji painted behind a random Model S, and ultimately means very little?

...granted that someone at Tesla PR would have had to have lost their mind to have done this ("Hey look, here is a Model S with some niche graffiti behind it, I think we'll repost it without explanation"), not knowing where speculation (see above) would lead to.

On Facebook in both the picture and the caption, Tesla used the text for the "?" emoji, which is slang for "keeping it real", which thought to be based from on a 100% score/stamp placed on school test papers.

Update (April 26th, 2pm (ET)):  The Model S pictured with just the 100 emoji has now been replaced with the note "?% electric", indicating the person in charge of Tesla's social media has realized (or been told about) his/her confusing hipster mistake.