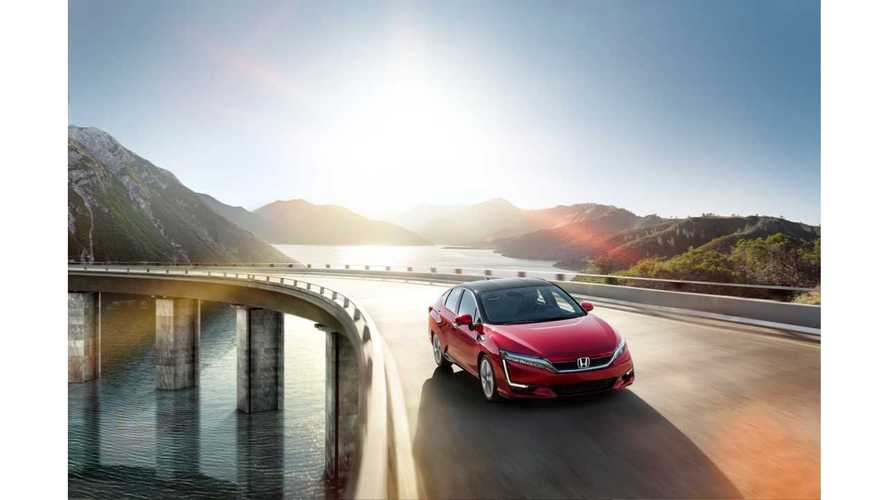 The upcoming 2017 Honda Clarity Fuel Cell will be more affordable than earlier expected as the Japanese company announced a $369 a month lease price, with $2,499 down at lease signing.

Honda (like Toyota before it) also adds up to $15,000 of free hydrogen at participating hydrogen stations during first three years, and 24/7 roadside assistance as well as up to 21 days of an Avis Luxury Rental in California.

Honda's hydrogen flagship is rated at 366 miles of EPA range and unlike Toyota Mirai can accommodate five passengers.

By the end of this winter Clarity Fuel Cell to be available at 12 dealerships in California. Expansion of hydrogen fuel stations in the future will help to adds more dealers at later stage according to Honda.

"Retail leasing will be available to residents who live or work near Honda's network of 12 approved fuel cell vehicle dealerships located in select California markets. This network includes six dealerships in Southern California, five in the Bay Area and one in Sacramento. Honda will further develop its dealer network as consumer friendly hydrogen fueling stations become available.

The Clarity Fuel Cell received an EPA driving range rating of 366 miles and fuel economy rating of 68 MPGe (miles per gallon of gasoline-equivalent) combined, giving it the best range rating of any zero-emission vehicle, which includes fuel cell and all-electric cars, in the United States."

There is some further fine print for "retail" lease consumers eligibility which basically states the main drawback of the tech at the moment - infrastructure:

"Clarity Fuel Cell will be available to residents of California living or working within a 10-mile radius of a hydrogen fueling station."

Below: A few pics caught of the Clarity Fuel Cell interior from the LA Auto Show this week (by InsideEVs contributor Tom Moloughney), overall impression was excellent inside - very comfortable and had a high end feeling.

"Launching the Honda Clarity Fuel Cell at an affordable lease price will enable more consumers to enjoy the benefits of this spacious and well-equipped fuel cell vehicle. With an EPA driving range rating of 366 miles, fast refueling and a growing network of hydrogen stations in key California markets, the Clarity Fuel Cell offers an experience on par with traditional gasoline vehicles."

With that said, the launch of the plug-in varients are probably at least one or two years ahead of us.