VW To Invest $3.7 Billion Into Electric Future, Cuts 23,000 Jobs At Same Time Due To EV Efficiency 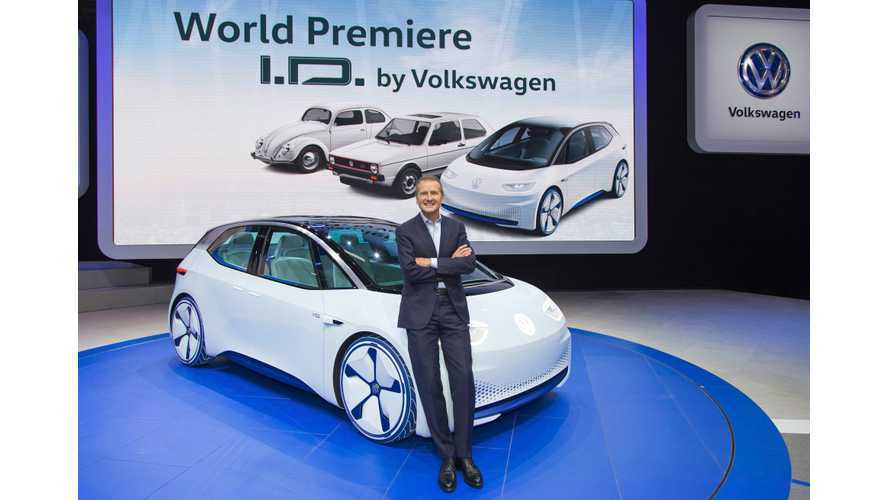 As a whole, the company is transforming from a pure automaker into a mobility service provider.

Interestingly, efficiency improvements in the labor pool due to making more straight forward electric vehicles will result in up to 23,000 jobs reductions in Germany (out of 120,000), but 9,000 more will ultimately be added in future-oriented areas.

"The Board of Management and General Works Council of Volkswagen have signed a pact for the future in Wolfsburg following constructive negotiations.

This pact will initiate the return of the Volkswagen brand to a path of profitable growth. The program for the German plants with about 120,000 employees is to significantly improve the competitiveness of the Volkswagen brand and to make the company fit for the future. It will lay the foundation for the transformation of Volkswagen from a pure automaker into a successful mobility service provider in the age of digitalization and increasing e-mobility. The main focus is on reorientation across the entire value stream.

By 2020, the Volkswagen brand intends to be completely re-positioned. Compulsory redundancies are to be excluded and the workforce is to be reduced in a socially compatible way. At the same time, new jobs are to be created in future-oriented areas. Specifically, the pact for the future is to have a positive impact on earnings of €3.7 billion per year by 2020.

Of this figure, the German facilities will account for €3.0 billion. Over the next few years, investments of about €3.5 billion in future-oriented areas of these facilities are planned. This will result in the creation of 9,000 jobs. On the other hand, there is to be a loss of up to 23,000 jobs in conventional areas in Germany, which will be accomplished in a socially compatible way."

Checking details of the investments, we see a lot of new projects in VW's plants in Germany. Some of which are fairly surprising.

For example there is a plan for a pilot plant for battery cells and cell modules in Salzgitter. Battery cells (not battery packs) is something that Volkswagen's CEO recently considered as a bad idea after early rumors pushed the company into battery cell manufacturing.

High spending is planned for VW's Modular Electric Drive Kit (MEB) for new generation electric cars with longer ranges (the first will be production version of the Volkswagen I.D.).

In further detail, Volkswagen's "pact for the future" includes the following items:

VW also recently took the wraps of the updated ~124 mile Volkswagen e-Golf...which will also be getting a generation/battery upgrade in the near future

The Chairman of the Brand Board of Management, Dr. Herbert Diess, said:

"With the pact for the future, Volkswagen will be taking a major step forwards. The pact represents a fundamental transformation of the value stream, the development of new competences and strategic investment.

We will be strengthening the company's economic viability and competitiveness and will be safeguarding the future of our plants. The socially compatible loss of jobs will be offset by the creation of jobs in other units." Diess emphasized that Volkswagen would be concentrating consistently on the future of the automotive industry.

"We will be transforming the entire brand and making it fit for the fundamental transformation of our industry. At Volkswagen, we are taking our future into our hands."

"The most important news is that the workplaces of our permanent workforce will be safeguarded. We have agreed that compulsory redundancies are to be excluded up to the end of 2025. In view of what is happening at other companies, this is a considerable success in troubled times.

With the pact for the future, we will be entering the field of next-generation e-mobility. The new cars based on the Modular Electric Drive Kit and electric components from our plants will make our German locations pioneers of electrification within the Volkswagen Group. The Works Council has ensured that these future-oriented vehicles will be made in Germany and not in other countries. Of course, the pact for the future has positive and negative aspects. However, it represents an acceptable compromise for both parties, reached after a long struggle. We have now achieved a reasonable result."

$10 says the doors on the Volkswagen I.D. don't live to see production

Dr. Karlheinz Blessing, Member of the Board of Management responsible for Human Resources, said:

"The implementation of the pact for the future will bring major changes for many of our employees. They will need to obtain additional qualifications, learn new ways of working and assume new responsibilities. But the effort will be worthwhile: we will make Volkswagen slimmer, faster and stronger, safeguarding employment in Germany in the long term."

Hat tip to Josh B!