At COP22, 8 Countries Commit To Expand EVs In Government Fleets 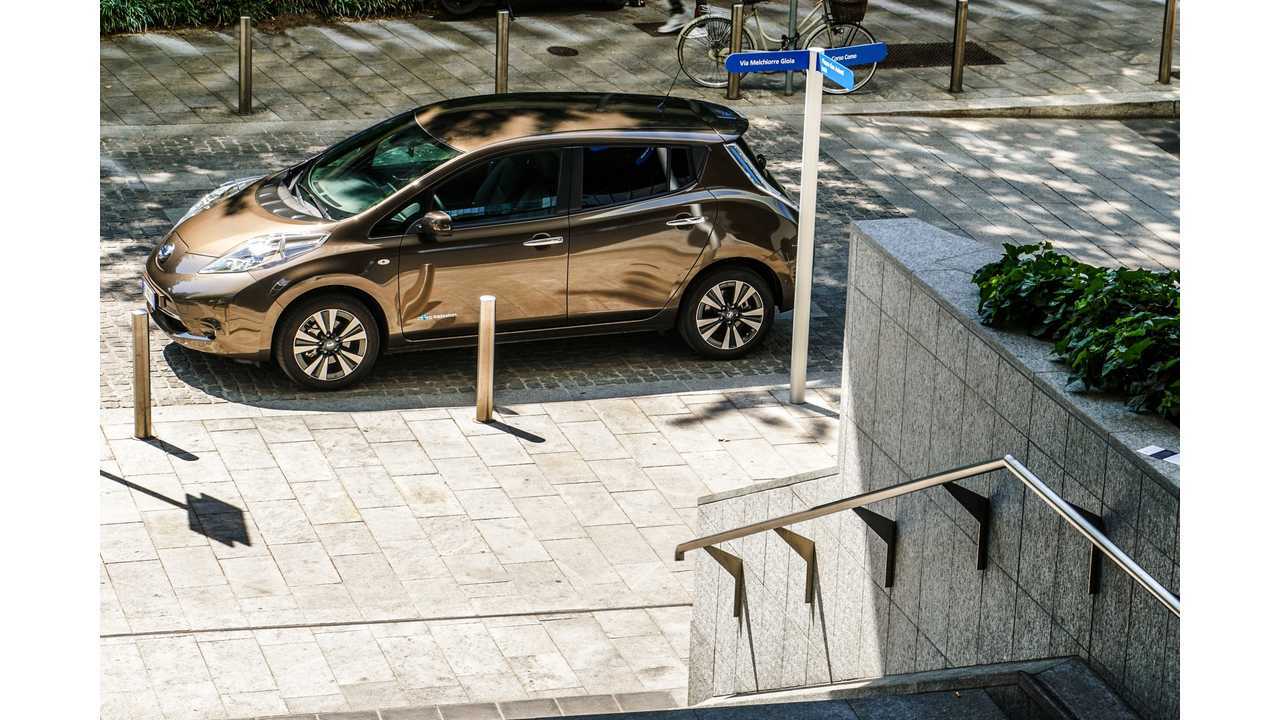 Eight countries, which make up the largest EV markets, declared from the Marrakech Climate Change Conference (COP22) they would increase the share of electric vehicles found in their government's fleets.

There were no strict targets put in place, but all of the participants intend to buy more plug-ins, and will encourage non-state actors (such as cities, regional and state governments, companies, etc), as well as other countries, to do the same.

"The Declaration emphasises the renewal of government fleets and showcases specific and voluntary commitments of these countries to accelerate the introduction of low-emission vehicles in their vehicle fleets. Through this Declaration, the eight signatory governments are taking a leadership role in this movement and sending a strong signal for the need to speed up the transition to a low-carbon transport.

Greenhouse gas emissions from the transport sector today account for nearly a quarter of total emissions. The share will increase significantly in the coming decades unless high-impact actions are taken. Changing the trajectory of emission in road transportation involves a global shift towards low-emission vehicles, along with the adoption of broader sustainable transportation principles.

The voluntary commitments taken by these countries will reduce fleets’ greenhouse gas emissions and help accelerate the transition to low-emission vehicles, in line with the goals of the Paris Agreement.

The members of the Clean Energy Ministerial’s Electric Vehicles Initiative cooperate to facilitate the global deployment of 20 million electric vehicles, including plug-in hybrid electric vehicles and fuel cell vehicles, by 2020. This Declaration is also in line with the Paris Declaration on Electro-Mobility and Climate Change and Call to Action released at COP21 during the Lima Paris Action Agenda (LPAA) Transport Focus, which specifies that at least 20 percent of all road transport vehicles (cars, 2 and 3-wheelers, trucks, buses and others) globally should be electrically powered by 2030 to respect a less-than 2-degree pathway.

This Declaration also aims at encouraging non-state actors, such as cities, regional and state governments, companies, sectorial federations and other organizations, to accelerate the energy transition with the introduction of clean vehicles in their fleets, including transit buses, taxi fleets, as well as municipal and corporate fleets."

In December 2015, as part of COP21, Canada joined 195 other countries in committing to do our part to lower our GHG emissions, and address climate change. The Government of Canada is proud to re-affirm these commitments, and again join the international community which has, today, committed to lead by example and accelerate the deployment of lower emitting vehicles in government operations. Canada is a leader in the fight against climate change. Both overseas and at home, we are taking action to reduce carbon pollution, spark innovation, and create jobs during what many are calling the clean energy century. But leadership starts with government itself. That is why we are committed to reducing emissions from government operations by 40 percent by 2030 (based on 2005 levels), and will strive to achieve this goal even earlier, by 2025.

The federal government will use cleaner energy and become more energy efficient across many areas—from buildings, to transportation, to buying more sustainable products. A portion of these reductions will be achieved through strategic investments in the use of electric vehicles in our fleets, as well as building the requisite recharging infrastructure. We will also work with our Provincial and Territorial partners to encourage all levels of government to deploy lower emitting vehicles in their operations, through the establishment of best-practices and sharing of the experiences learned from early adopters.

The Chinese government promulgated in 2014 the Implementation Plan for the Purchase of New Energy Vehicles by Government Organs and Public Institutions (link). From 2014 to 2016, new energy vehicles1 accounted for a minimum of 30% of annual new vehicles purchased by government departments, government organs and public institutions at the level of central government. The minimum percentage of new energy vehicles in annual purchases by the categories of institutions listed above will gradually increase in subsequent years.

Since the adoption of the Energy Transition for the Green Growth Act in 2015 (link), the French State and its public bodies are committed to introduce a minimum share of 50% of vehicles with low emissions of CO2 and air pollutants2, including primarily BEVs and PHEVs, when renewing their fleets. Local authorities are subject to the same requirement, with a minimum threshold set at 20% of the vehicles they will purchase to renew their fleets. This is expected to result in 5 000 low emission vehicles per year for the central government and its public bodies and 4 000 low emission vehicles per year for local authorities from 1st January 2017. All new buses and coaches that shall be acquired for public transport services from 2025 onwards must also be low-emission vehicles. Japan

Governmental action on the renewal of its vehicle feet is expected to contribute significantly to the aim of the Japanese Road Map for the Dissemination of Electric and Plug-in Hybrid Vehicles to increase to one million the total stock of electric and plug-in hybrid vehicles.

Norway has ratified the Paris Agreement on climate change (link) and committed to 40 percent reduction of greenhouse gas emissions by 2030 compared with the 1990 level. As part of this agreement, Norway will continue their efforts for greenhouse gas reduction in the road transport sector. This will be central in our new National Transport plan for 2018-2029 that will be ready in the spring of 2017.

The Swedish government has announced that Sweden will be one of the world’s first fossil-free welfare nations, and that in the long term our energy system will be based on 100 per cent renewable energy. The transport sector is a particular challenge in the work that lies ahead of us, working towards this ambition. Electric vehicles are expected to play a key role and government fleets can act as precursors. Apart from general incentives, promoting environmental-friendly and electric vehicles, the Swedish government has launched particular incentives directed towards governmental fleets (link). One example is that governmental agencies are forced to consider the environmental aspect in the procurement of vehicles, by purchasing electric vehicles or by using biofuels. Another example is a recently launched subsidy for electric buses used in public transport: Public transport agencies will receive up to 700 000 SEK for each electric bus and up to 350 000 SEK for each plug in hybrid bus. United Kingdom

The Government of the United Kingdom (UK) has a commitment (link) that nearly all cars and vans in the UK will be zero emission by 2050, and has committed over £ 600 million in the period 2015-2020 to support this. Government and wider public sector fleets must show leadership in supporting the inevitable switch to ultra low emission vehicles (ULEVs). A number of programmes, led by the Office for Low Emission Vehicles (link), are aimed at supporting the UK public sector in the uptake of ULEVs.

The UK Government has reviewed the largest UK public sector fleets to assess the opportunity for vehicles in these fleets to be switched to ULEVs. As a first positive step in this transition, a £ 5 million public sector ULEV readiness programme (link) is bringing 300 vehicles into the public sector fleet and supporting the installation of appropriate recharging infrastructure. The UK Government worked with 12 local authorities on specific measures to increase the uptake of ULEVs and has supported action in 8 key areas under the UK’s £ 40 million Go Ultra Low City scheme (link). Three exemplar cities – Bristol, Nottingham and Milton Keynes – have committed to increase the number of ULEVs in their fleets by around 200 vehicles.

Infrastructure is a key enabler for local authorities and Government has already helped them install nearly 1000 charge points. This number will be increased significantly through the UK’s £ 7.5 million workplace charging scheme (link), announced in October 2016. Around 30 fuel cell electric vehicles are being trialled by public sector bodies under the £ 11 million HyTAP (Hydrogen for Transport Advancement Programme) initiative (link). The UK Government is undertaking a review of its Buying Standards for vehicles, and plans to amend these standards to encourage future Government and public sector vehicle purchases to be ultra low emission.

The Obama Administration continues to lead by example to combat climate change and reduce the nation's carbon footprint. In 2015, the Federal government set aggressive targets to reduce its own greenhouse gas emissions 30% by 2025 and acquire 20% of all new passenger vehicles as zero emission (ZEV) or plug-in hybrid by 2020 and 50% by 2025 (link).

Twenty-four state and local governments have joined the Federal government to electrify our fleets. These new commitments account for over 2,500 new electric vehicles in 2017 alone and help pave a path for a sustained level of purchases into the future.

This builds upon prior commitment and action by forward leaning states and cities that have and continue to pursue fleet electrification.