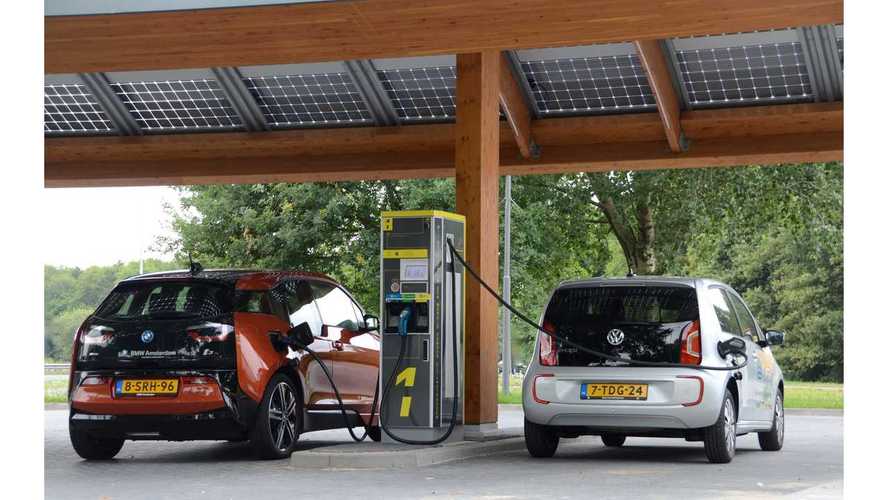 Fastned released its financial results for the second quarter, and the first half of this year showed continued strong growth of both revenue and energy delivered.

The Dutch company is one of the first that is trying to a build nationwide, reliable fast charging network on a commercially profitable basis, which is very difficult to say the least.

Because about half of the all-electric cars in the country are made up of the Tesla Model S (5,229 registered through June), one of the smartest moves for the charging provider was to equip its stations with Tesla CHAdeMO adapters (they can now be found at all stations).

That virtually doubled Fastned's potential customer base, although Tesla Superchargers are still faster (higher power) and of course free of use*, so the effect from doubling that EV pool is not as strong as it could be without the Supercharging network present.

Anyway, Model S and Model X owners will be now have the option to easily charge - at up to 50 kW DC, instead of the more common 11 or 22 kW AC stops, at 50 Fastned stations in the country.

The financial results overall are still solidly in the red however, as the network still needs to scale up significantly, while waiting on the EV market to mature at the same time.

"As expected, Fastned had an (unaudited) operating loss of EUR 2.2 million in the first six months of 2016"

Highlights of the first half year, or check out Fastned's full finances here (PDF):

“We look back at a half year in which we continued exponential growth of our revenues, kWh (volume) delivered, and the number of registered customers.

12This autonomous growth proves our relevance to EV drivers based on network coverage (50 stations operational), extremely reliable service (99.99% uptime per station) and transparent, attractive pricing. We also connected the charge cards of providers such as The New Motion and EV-Box to the Fastned app. Finally, we have effectively doubled our market by installing Tesla adapters at all our stations. Where Tesla's could previously charge at 11kW to 22kW, they can now charge 50kW at Fastned. Because of this, we see the number of Teslas at our stations increase significantly."

Video (below): Fastned put out this promotional investor video at the start of Q2 that helps articulate just what the company is about, and how far it has come. (Bonus: Look for everyone's favorite EV website to make an appearance too)