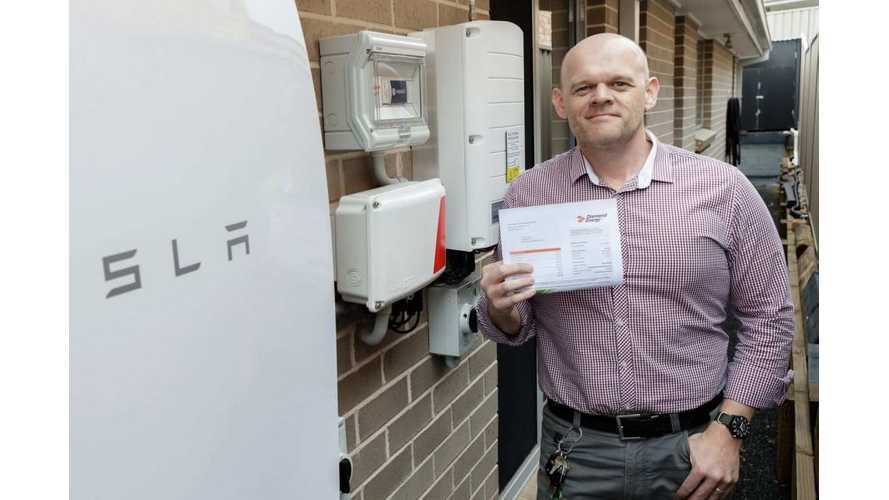 On launch, Tesla prioritized delivering the first Powerwall units into Australia, and the very first unit went to a chap by the name of Nick Pfitzner from Kellyville Ridge, which is a suburb of Sydney in New South Wales.

(Read our coverage of that event from January here)

Now Mr. Pfitzner checks back in on his impressions of the system (and the 5 kW solar PV system he had installed at the same time) to ABC News - 702 Sydney...which in this case stands for Australian Broadcasting Corporation.

"I have absolutely no regrets.  The battery performance is still what it was on day one, and we'll be keeping an eye on that over the coming years...I'll consider more panels and another battery in a few years."

While setting up a solar array and Tesla Energy system certainly doesn't come cheap, and the payback will take a very long time, Pfitzner says he still saves 90% on his daily energy bill as a result.  Down from $5-6/day to 59 cents.

The total cost of that Tesla Powerwall system (which originally came as a 7 kWh unit, now available only as a 6.4 kW unit) and the 5 kW solar PV system?  $16,000 ($12,000 USD) - after incentives via the Solar Bonus/Credit Scheme (that includes ESS), which if not renewed, expires/decreases this December.

Again, it isn't all about the money, as the first Tesla Energy customer notes:

"It's about eliminating waste ... so I'll say, 'hey kids turn off the lights'...We run the dishwasher during the day and shift as much power use to the daytime so we're using solar power."

"But we haven't sat there frozen, turned off the lights and sat in the dark with candles.  You still need to live."

Pftizner says that on a sunny day, the Tesla Powerwall could be filled up by around 11AM, then any excess power heads back into the grid.  Conversely, when the power is used up or the sunlight is not optimal to get through the needs of the day, power is taken from the grid as required.  Over the first 6 months, about 75% of his usage has been self-generated/contained.

"People with solar power know about the benefits but the Powerwall takes it to a new level for me. When the sun goes down, I've still got peak power from the battery."

Return on investment for grid-tied solar in Australia is around 3-4 years, while combining PV with an energy storage system, such as the Tesla Powerwall, can extend that payback time closer to 10 years.

Check out the full reveiw at ABC News, Hat tip to Dairob P!