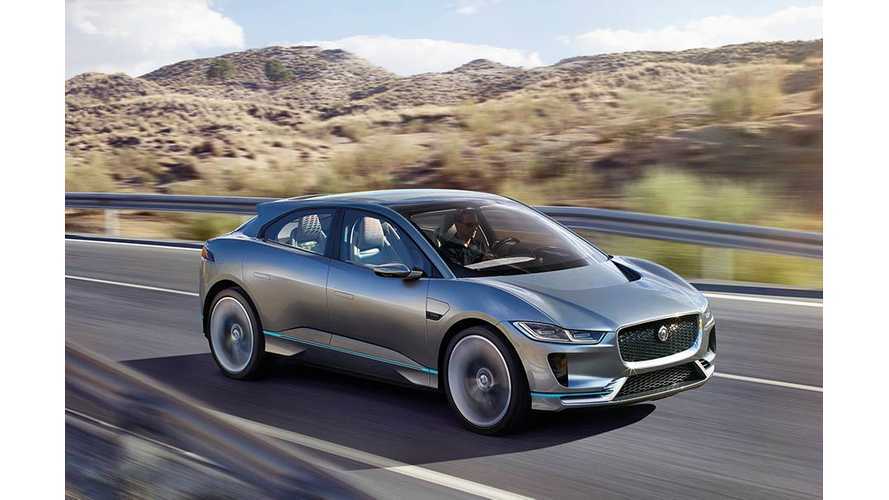 We have heard about Jaguar's intention to get into the all-electric vehicle game for several years now, and from the Los Angeles Auto Show they have officially announced their first entry.

As such, Jaguar has taken the wraps of a 220+ mile (EPA estimated) all-electric vehicle named the i-Pace.

"The Jaguar I-PACE Concept(1) Vehicle is the start of a new era for Jaguar.  This is a production preview of the Jaguar I-PACE, which will be revealed next year and on the road in 2018.  Customers can register now at jaguarusa.com to be one of the first I-PACE owners."

Jaguar i-Pace Concept: all-electric SUC design is for all intents and purposes already locked in - goes on sale in 2nd half of 2018

Jaguar promotes the new vehicle as both a "no-compromise smart, five seat sports car" and also "a performance SUV" all in one.

Jaguar states the i-Pace Concept's electric motors and 90kWh battery pack (not the cells - LG Chem's handiwork of course) were designed in-house; although the company notes a public DC fast charge will take just over two hours (curiously via 50 kW) for a fill - which seems to be about the minimum standard for a premium EV sold in 2018...or today for that matter.   Hopefully, this was just a random example of recharging time, and not the limits of the i-Pace's ultimate DC fast charging abilities.

Thankfully, Jaguar did not also try to re-invent the door...

Jaguar has said the model's full production-intent reveal will happen later in 2017 (think Geneva in March by our estimates) - but all the design and spec work is mostly locked in as of today, outside of some smaller details.

The British automaker has not dropped any hints as to pricing, however given the nearest competition on the market today - the Tesla Model X 90D, which starts at around $90,000, we'd say that was a good starting point.

By the time the Jaguar arrives in the second half of 2018, it will find at least two other premium long range utility EVs arriving from familar rivals at just about the same time - the Audi e-Tron (details) and Mercedes-Benz EQ (details).

Currently Jaguar is running a "I want one" promotion on the i-Pace, so if you do "want one", or just more information, the online registration form and Jag mini-site for the all-electric SUV can be found here.

Jaguar i-Pace Concept from above