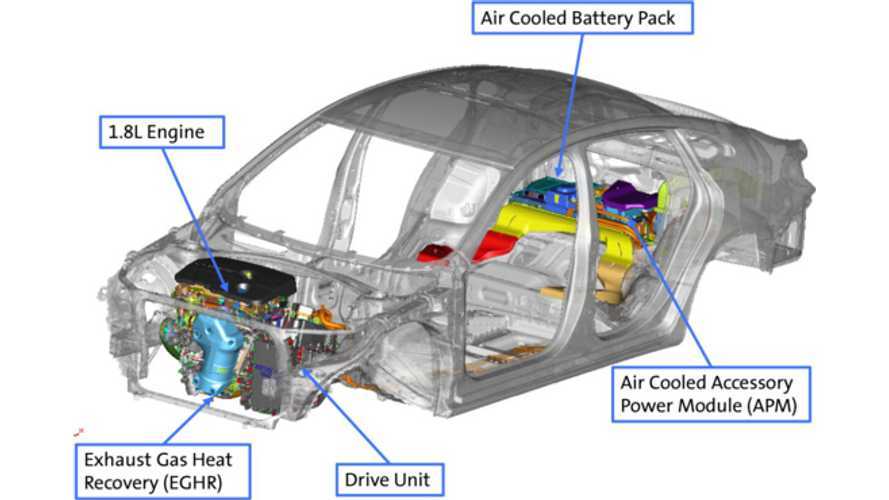 The 2016 Chevrolet Malibu Hybrid is a non-plug-in, so it normally would not catch our gaze - but it utilizes second-generation 2016 Chevrolet Volt Voltec powetrain to achive its 46 mpg fuel economy...so it's worth a look.

Green Car Congress recently released a detailed description of the Malibu Hybrid powertrain, and a comparison to the Volt, based on a SAE “Development of Hybrid-Electric Propulsion System for 2016 Chevrolet Malibu” article.

A common system in both cars is the transmission architecture, with two electric motors and changes to optimizations in a different application. (In case of Malibu Hybrid, there are also changes in the type of rotor of one of the motor)

"Voltec drive unit. The drive unit is a transaxle configuration comprising transmission gearing and clutches; hydraulics; electric machines; and integrated power electronics. The basic layout is an on-axis design which is similar to GM’s 6T40/45 family of small-car front-wheel drive automatic transmissions. The center distance and vertical drop between the engine and output axes were designed to be common; this design approach enables the use of a common chain transfer design and final drive gearing, which provided a wide range of final drive sprocket and planetary gear sets allowing an effective final drive ranging from 2.64 to 3.50.

The transaxle includes two electric machines coaxial with the input shaft as well as an integrated Power Inverter Module which connects via busbars to the motors. The Power Inverter Module and motor stators are common between the EREV (Volt) and HEV (Malibu) versions. However, the transaxles were designed with unique rotors specific to the application. The stators utilize a bar winding design, while the rotors are two barrier interior permanent magnet designs using NdFeB magnets."