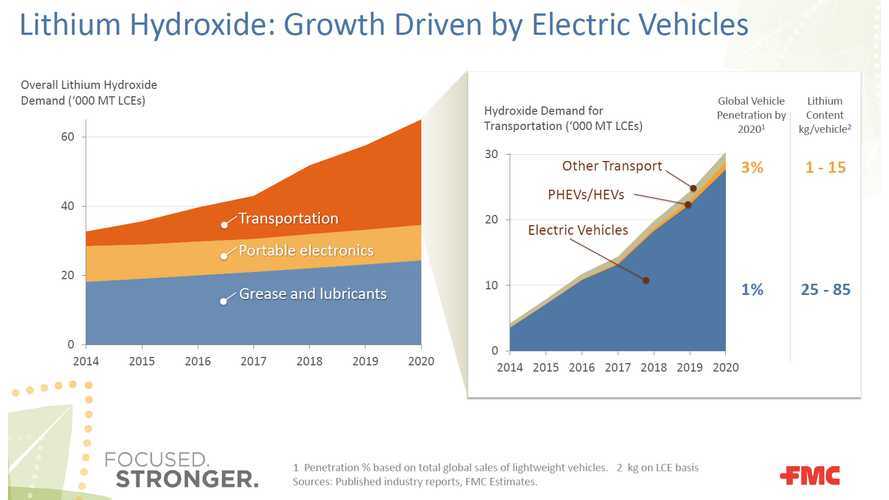 One of the largest players in the lithium market - FMC Corporation, announced a multi-year supply agreement of lithium hydroxide with a major EV manufacturer.

As of yet, there is no details on which manufacturer struck the deal, but we understand it must be an OEM who also produces batteries in volume (now or in 2017), shorting the field by quite a bit. So perhaps Tesla, Nissan, BYD...

The company says that in mid-2017 additional capacity of some 4,000 tones os lithium hydroxide per year will come online, bringing the total output of FMC to 18,000 metric tons annually.

In the coming years, FMC intends to again increase production to 30,000.

Over the next several years, FMC plans to further increase capacity of lithium hydroxide, raising the company's annual output to at least 30,000 metric tons."

"We partner closely with leading manufacturers of lithium ion batteries and electric vehicles to ensure our production meets their current and future demand. Our manufacturing network is highly flexible, which allows us to increase capacity or accelerate expansion plans as customer needs warrant."

According to FMC Corporation's Investor Presentation, energy storage also is becoming an important growth factor for the lithium, although EV use is still far and away the main driver for sales.

The planned bump to 30,000 metric tons would translate to the ability to supply demand for 188,000 to 640,000 new EVs over today's volume. In reality, that kind of volume increase could only be taken up by Tesla (with the Model 3), BYD (with a dozen plug-in products), or Nissan (which also includes Renault and now Mitsubishi).