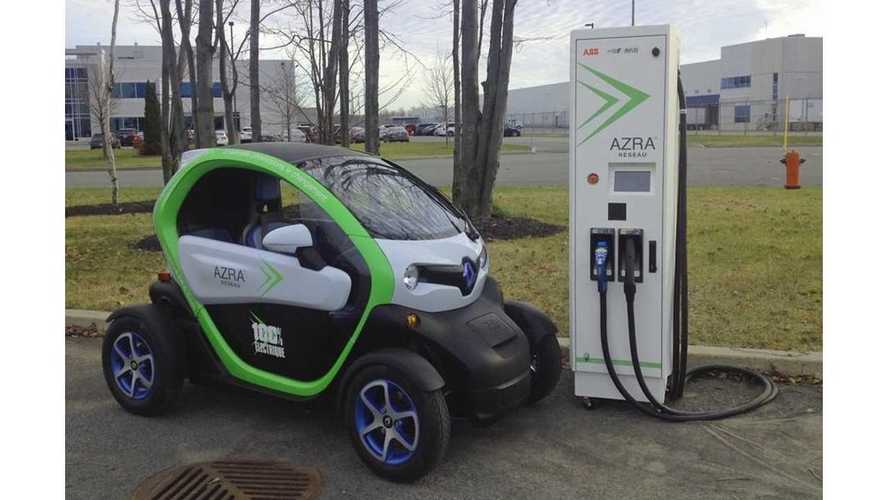 Renault and partner, charging provider AZRA announced the arrive of the Renault Twizy 40 to Canada today from a press conference in Montreal, Quebec.

The Canadian Renault Twizy 40 is fitted with a type-1 charging cable and side reflectors. With speed capped at 40 km/h, it comes under the Canadian category of low-speed vehicles (four-wheel electric vehicles with top speed from 32 to 40 km/h).

The car was certified for sale by Transport Canada from March 1st, 2016.

“Renault Group is delighted to have chosen a company as dynamic and committed as AZRA for the launch of Twizy in Canada,” said Guillame Berthier, Renault’s Electric Vehicles Sales Director.

“Electric car, and Twizy in particular, enable Renault to boost its international development. It also allows Renault to participate in the development of new ways to sell cars. This is demonstrated by AZRA’s “all in one” offer, with digital playing a dominant role in the sales model.”

A point of interest from the model's entry into Canada, it seems Renault/AZRA is taking a page out of its European roots - instead of offering the Twizy 40 for sale (we had heard earlier that around $17,000 would be the aprox. landed retail sale price), AZRA says it will make the all-electric quadricycle available via lease only, at a still respectable $99/month (which includes registration and insurance).

The Twizy has a maximum range of 100 km (62 miles) based on the NEDC standard, which is equal to about 40 miles (65 kms) in the real world /the US EPA standard.

It Is Easy To Park Though. We Can't Argue Against That

We did get a chance to speak with a Renault representative from the event to break down the curious Canadian offering.

On where it will be available:

The Twizy will be available in the provinces that'll certify it, and this is currently underway.

Where will it roll-out first and when:

Quebec should happen right before the summer

As obviously there is a provincial EV rebate kick-back making the Twizy just $99/month in Quebec, what about Canada's other two provinces that offer plug-in incentives:

Ontario and British Columbia are almost a done deal. We are reaching out to other provinces as a second step.

There are also discussions regarding the Twizy 80 version, but the category doesn't exist in Canada so we'd have to wait for it to be created before certifying it with Transport Canada.

On the curious decision to only lease the Twizy 40.  Renault or Azra decision and why:

Azra wants to sell Twizy through an all inclusive Canadian $99/month offer. It's innovative and we're working with them because we're interested by the business model. That would include the car, the charging point, charging fees and a peer to peer car sharing system. They will basically encourage their customers to make their Twizys available for hire to other users (through an app they developed). The Twizy owners would then lower their monthly fees that way.

And as always, we took the opportunity to again mention to Renault that InsideEVs has a certain weak-spot for the Twizy after spending a summer with one a few years back, and that we would be happy to take a few off their hands ... provided of course they could find a way to make them available/legal where are North America staffers are located.

Our thanks to Renault for taking the time to include us in the event launch and talking us through the Twizy's launch in Canada.

Over the next 18 months, AZRA will invest $40 million to install 2,000 new electric charging stations (bring the total station count to ~8,000) and deploy the Twizy, Renault's first 100% electric vehicle in Canada.

"At AZRA, we are change agents on a mission to reduce greenhouse gas emissions," said Jean-François Carrière, President and Chief Executive Officer of AZRA. "We are proud to be investing in transport electrification because it is the way of the future to reduce our environmental footprint."

"By using our electricity to power our transport we will improve our environment while increasing our economic prosperity," said Jacques Daoust, Minister of Transport, Sustainable Mobility and Transport Electrification. "I therefore welcome the investments announced today by AZRA. The fact that Renault has chosen a Québec company to market its electric car in Canada speaks volumes about our leadership in this area."