Electricity beats Gasoline when it comes to Dinghies 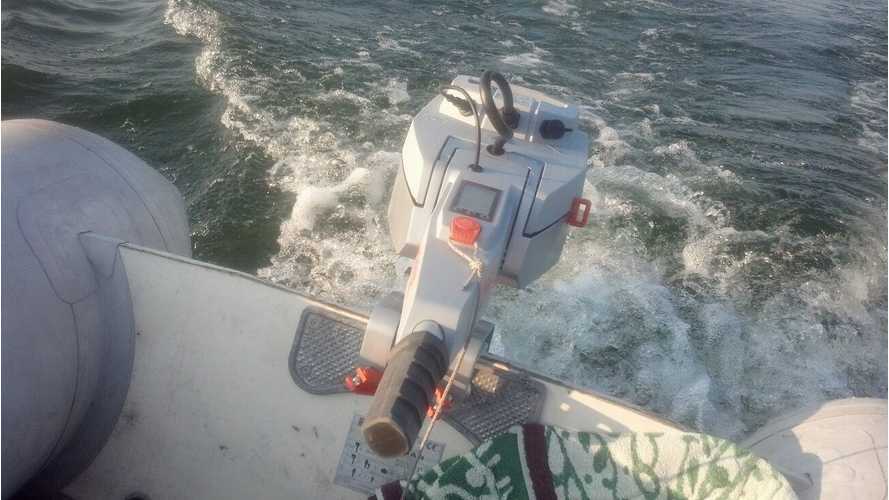 Torqeedo Travel 1003 Electric Outboard Motor Mounted to Avon 10’ inflatable air floor dinghy. Also displayed is a spare battery which can be easily swapped out in seconds.

As an owner of a Tesla Model X and Chevy Volts, I have virtually kicked the gasoline lifestyle.  I have even gotten rid of the last of my grass and gasoline powered yard tools.  The biggest offender that I have owned was a 2001 Regal 32 foot coastal cruiser that sucked gasoline at 30 gallons per hour (or more).  It has been sold off and now belongs to a fellow in Sweden.

Mark's Tesla Model X doing some destination charging (of note: there is a bicycle also inside there somewhere)

I did retain one element of that lifestyle, the 10 foot Avon inflatable dinghy, but updated it to my gasoline-less existence. The kicker here is that electric beats the pants off a gasoline outboard in so many ways.  I wish I had this option 16 years ago, even before we all came to grips with the petroleum monster.  It would have saved many, many headaches.

Being a former naval officer, I was well prepared to deal with any and all maritime necessities when we bought our Regal.  I knew that we would drop anchor in the harbor and pop the dinghy in the water and motor in to a dinghy dock and enjoy our time ashore.  From Key West to St. Augustine, our dinghy saw extensive use as a service craft.

For the ultimate in portability, and stowage, I chose to purchase an Avon dinghy that had an inflatable floor.  To give you an idea of how efficient this can be, I was able to toss the deflated dinghy, gas tank and 6 HP outboard motor in the trunk of my 1993 Buick Roadmaster, and close the lid.  I also purchased a 12v Scoprega Bravo inflator capable of accommodating the 11 psi air pressure required for the floor of the dinghy.  Pressure this high for the floor enables you to forego the planks or other cumbersome means of giving you a rigid bottom for your dinghy.  If I was alone in the dinghy, my 6 HP gasoline motor could actually get the boat up on plane.

Now to the drawbacks of that gasoline outboard; where do I begin?  Well, let’s start with the actual gasoline.  The portable tank that accompanied the motor held 3 gallons- and where do you put it?  There is limited storage space on a 32’ boat that won’t be stunk up by a can of smelly gas.  While my cruiser’s tanks held 170 gallons of fuel, I can tell you from experience that siphoning gas from those tanks was a horrible, stinky and time consuming pain.  But when the only paradigm you know is gasoline, you just put up with the hassle- what else are you going to do- row?

I chose the 6 HP motor because it was the smallest form factor for the maximum propulsion.  It weighed 60 lbs.  While maneuvering 60 lbs may not seem that bad, consider the environment of a swim platform that is 4 feet wide, slippery and moving up and down in the water.  Every time I had to mount the motor to the dinghy, I was terrified that I would drop it in the drink and it would disappear forever.  And even after I managed to get it in the dinghy, while maneuvering it over the transom, I was further terrified that the propeller would destroy my air floor.  But what else was I to do- row?  Well, yeah, a number of times I did just that instead.

And then there is the reliability of those blasted pull to crank outboard motors that can so easily flood with fuel.  In 2010, I used the dinghy to take my nephew and nieces to the nearby state park.  When I went to restart the motor, I had to pull and pull…and pull.  Another fellow, seeing my efforts, came over, and he pulled and pulled.  Together, there was over a half hour of pulling before the engine finally quit resisting.  I still have that blasted outboard motor, but the last time it gave me fits, I said enough and found a replacement.  I went looking for ‘electric outboard motors’ in 2014 and found ‘Torqeedo’.  The model I got is the Travel 1003 Short Shaft that comes with a 520 wh battery, equivalent to a 3 HP motor.  I also bought a spare battery.

When you start with a gasoline paradigm, you look at the images and expect a cord to run somewhere into the boat…and then you read further.  No, that half kwh battery is integral to the outboard form.  The outboard disassembles into 3 pieces- the battery (about equivalent to an oversized lunch box in weight and dimension), the couple foot long shaft assembly that is so lightweight, you will find bicep dumbbells that offer more resistance, and the control stick- which is comparable in size to my camera tripod.  That’s it- there would be no more panicking when bringing these items in the boat; absolute ‘child’s play’. Reassembly is simple and takes seconds.

And then…no more priming of gasoline.  No more cranking.  Just an ‘On’ button and turn the throttle and you are in motion.  Turn it in the other direction to go in reverse.  A digital readout uses GPS to determine speed and range remaining.  You also see the percentage of battery you have left.  Effortless!

Torqeedo also provides electric propulsion options to meet greater needs. The owner of this boat had his craft custom made with Torqeedo motors powered entirely by onboard batteries charged with solar PV electricity.

Just sooo many advantages, it is hard to think of them all.  No, I will never get up on plane with this motor, but the gas can is gone- with all its smell and its place in your people space.  Where the gas can used to sit, I can park my butt.  And think of that butt parking space.  It puts your head right next to the motor.  Would the heat and decibels of a gasoline motor allow you to sit in that space? I put a beach towel against the (wooden) transom back and lay my arm over the throttle handle.  It is quiet and smooth.  As with any other electric motor, when you are at idle, you have absolute silence.  Going in reverse with the gasoline motor involved hanging over the side and flipping a lever.  Now I just turn the throttle handle in the opposite direction.  There is no motor oil to change or shaft lube to worry about.  No washing of hands after you handle things.  No exhaust smoke.  No sheen on the water- and those who have experienced this understand how big of a deal this is.  Just a few misplaced drops of gasoline and you feel like everyone in the marina is staring at you.

In the boating world, many would refer to a dinghy as a ‘tender’.  This is the perfect tender situation.  You want your tender in the water, fast, with a minimum of fuss.  Bigger boats have the luxury of leaving a tender on a davit that swings out and can drop the tender in the water.  Many sailboats leave their tender in the water, slowly trailing behind (not a possibility for a high speed cruiser).  Tender voyages are typically measured in yards, not miles.  Speed and performance are of minimal concern- except to ferry people to land.  If I had this Torqeedo motor a decade ago, I would have jumped regardless of sustainability or environmental issues.  It’s an absolute no-brainer.

Another look at Mark's Tesla Model X...because well, it's a Model X (and because 'Internet law' requires a picture for every couple paragraphs of text)

Of course, I no longer use this dinghy as a tender.  I now use this dinghy to go out to a beach at a state park that is probably ten miles round trip.  I made this trip with my wife a couple weeks back, along with lounge chairs and lunch.  I think we went about 3 mph or so.  I used a little over half of each battery- so under a dime’s worth of electricity.

I only use the lithium batteries that are designed to directly attach to the outboard.  However, there are 12v options so that you could keep going if you had a 12v system you were hooked up to.  Torqeedo even sells a flexible solar panel that plugs directly into the outboard.  You could actually rig up the panel as a canopy over your dinghy and have sort of a perpetual motion machine, as long as the sun shines.  The motor comes with a charger that will recharge your battery overnight using regular old 120v AC.

As mentioned, I will never get my dinghy up on plane with this motor.  However, this is no run-of-the-mill trolling motor you would see on the bow of some bass boat.  You will go fast enough to generate a noteworthy wake.  But the faster you go, as you would expect, you cut down on your range.  If you’re cruising, this is in the forefront of concerns.  I could probably go 20 miles with my two batteries if I was conservative.  But the gist of my recommendation to all who will hear is that, for tender duty, Torqeedo has a solution to all of those gasoline outboard motor complaints…and oh yeah, and it just so happens to be a green option, at that.

There are other electric propulsion options to be found on the Torqeedo website, with significantly more capability than what I describe here for dinghy usage.  You can check them out at this link.  As we used to say in the Navy, I wish you ‘Fair winds and following seas.’