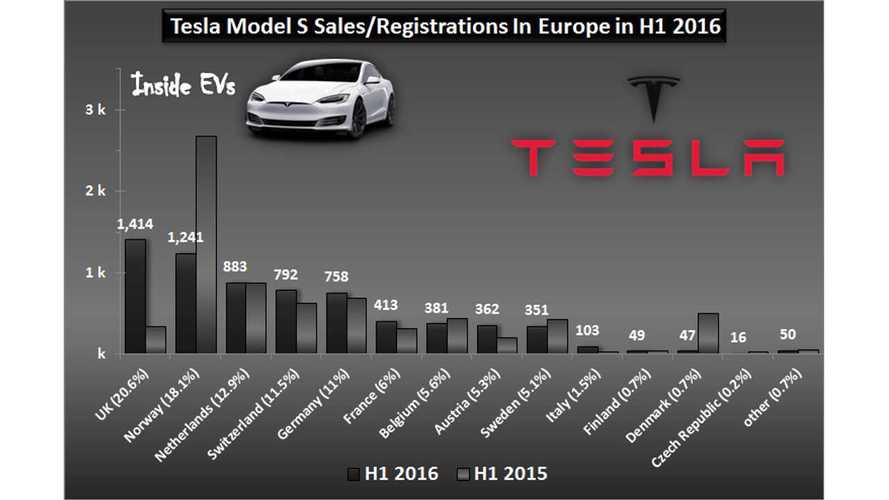 While the Tesla Model S sales in the North America went up few percent points to some 12,000 in the first half of this year, in Europe Tesla notes a decline.

Tesla was hit by lower demand from one of its largest markets - Norway. In 2015 more than 2,600 new Model S were registered in Norway, while this year just 1,241.

Great surge in UK from 349 to an estimated 1,414 was not able to balance the European results as many other countries also fell.

Part of the reason for the European fall off was the 2nd quarter, in which Tesla found itself with nearly twice the amount of customer's orders "in transit" at June's ends, most of which were heading into Europe.  Some 5,150 vehicles were 'almost' delivered by the end of the second quarter.

Tesla did not split out how many of those 5,000+ plus EVs where of the Model S vs Model X, so it is hard to pin a number on what "could have been" for Tesla with the Model S in Europe in the first half of 2016. Of note: In all of Q2, only about ~60 Model Xs were ultimately registered in Europe.

With this in mind, and from what we are already seeing for deliveries this month, we expect Tesla to sell many more than the ~3,500 moved in Q3 of 2015 and a good deal more than either of the first two quarter of 2016; just how many, and if it will be enough to help the company hit its guidance of 80,000 EVs sold worldwide in 2016 remains to be seen.