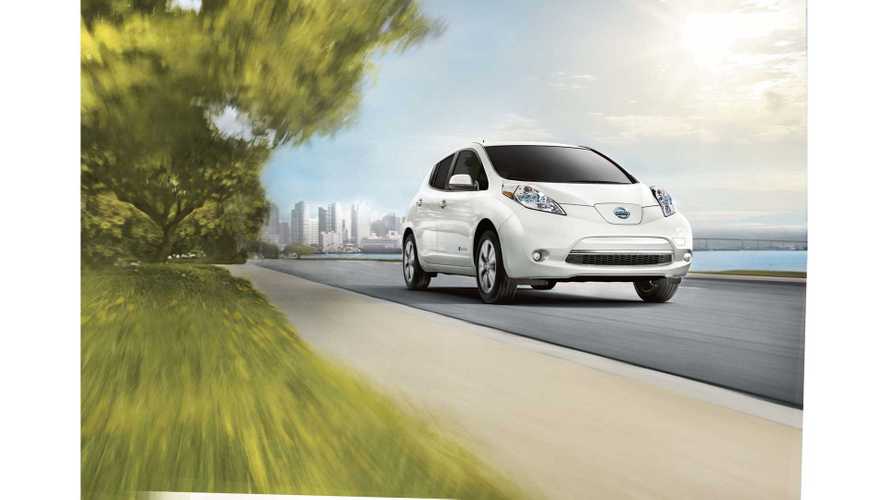 The 2017 Nissan LEAF is coming to U.S., although as of yet there is still no sign of a new/longer range version, or any otherwise big changes in the powertrain/charging abilities.  A fact that is likely to change after the upcoming autoshow season in the US.

Of special interest with Nissan's announcement of the 2017 LEAF lineup, is the deletion of the base 24 kWh version, leaving only the newer 30 kWh battery across all trim levels - S, SV and SL.

Truthfully, there isn't enough features to justify all 3 levels now with only the one battery choice...it is almost like the company is placeholding room for another option in the future by not paring down the lineup for this year.

But more significant than the removal of the base battery option, is a major price change, as entry into the 30 kWh/107 mile range option has decreased by ~$3,500 as the "S" model gets upgraded battery.

NASHVILLE, Tenn. – Nissan today announced U.S. pricing for the 2017 Nissan LEAF, which is on sale now at LEAF Certified Nissan dealers nationwide. The Nissan LEAF continues to be the best-selling 100-percent electric vehicle in the U.S. and the world, with more than 100,000 units sold in the U.S. and more than 238,000 units worldwide (as of October 2016).

For 2017, Nissan provides best-in-class range1 across all three trim levels – S, SV and SL – by offering the 30 kWh battery that was previously only available on LEAF SV and SL grades. Along with the 100-mile plus range, the 30 kWh battery can be quick-charged to 80 percent (from the low battery charge warning) in about 30 minutes. Charging on a home charging system (Level 2, 240V) is estimated to take about six hours with the 6.6 kW onboard charger.

Manufacturer's Suggested Retail Prices2 (MSRP) for the 2017 Nissan LEAF are:

Nissan offers a limited warranty3 covering defects in materials or workmanship for eight years or 100,000 miles, whichever comes first, for the lithium-ion battery pack. Nissan also provides a limited warranty against battery capacity loss below nine bars of capacity as shown on the vehicle's battery capacity level gauge for the first eight years or 100,000 miles for all models.

LEAF offers the space and range to meet every day needs while also providing an exceptional value proposition due to zero spending on gas, lower maintenance costs and a starting price after tax incentives competitive with a comparable gas-powered car.

The distinctive exterior styling is characterized by sharp, upright V-shaped design featuring long, up-slanting halogen headlights. LED low beam headlights and fog lights are standard on LEAF SL models. Other exterior features include standard rear spoiler, flat underbody with rear diffuser and aerodynamically shaped LED taillights. The charge port is hidden under a small door located in the front of the vehicle, with a standard light and door lock feature. The aerodynamic design results in a low coefficient of drag of just 0.28.

All grade levels include standard Bluetooth® Hands-free Phone System and RearView Monitor. Nissan's advanced Around View® Monitor4, which helps provide a virtual 360-degree view of objects around the vehicle, is offered as part of the Premium Package for SV and SL grades. The Premium Package also includes the seven-speaker Energy Efficient Series Bose® premium audio system.

For 2017, LEAF SV and SL grades include standard NissanConnectSM with Navigation– featuring a 7.0-inch color display with multi-touch control, Nissan Voice Recognition for navigation and audio, HD radio, SiriusXM® Traffic and SiriusXM® Travel LinkTM for weather, fuel prices, movie listings, stock info and sports (SiriusXM® subscription required, sold separately). The charging screen information is automatically updated every time the ignition is turned on and with every 12 miles of driving.

The NissanConnect EV system (no-charge subscription required), which is also standard on SV and SL grades, allows remote connection to the vehicle, providing monitoring of battery state-of-charge, start charging event control and turning on the heating and air conditioning system prior to entering the vehicle.

LEAF is assembled in the U.S. at Nissan's Vehicle Assembly Plant in Smyrna, Tennessee, with battery assembly taking place next door in Nissan's Battery Assembly Plant.

*Charging times and range estimates may vary depending on driving/charging habits, weather, temperature and battery age. The 6.6 kW onboard charger is a standard feature on SV and SL trims. It is an optional feature on the S trim. ** For complete information concerning coverage, conditions and exclusions, see your Nissan dealer and read the actual New Vehicle Limited Warranty booklet. **** Use the text messaging feature after stopping your vehicle in a safe location. If you have to use the feature while driving, exercise extreme caution at all times so full attention may be given to vehicle operation. Compatible smartphone required. Text rates and/or data usage may apply.