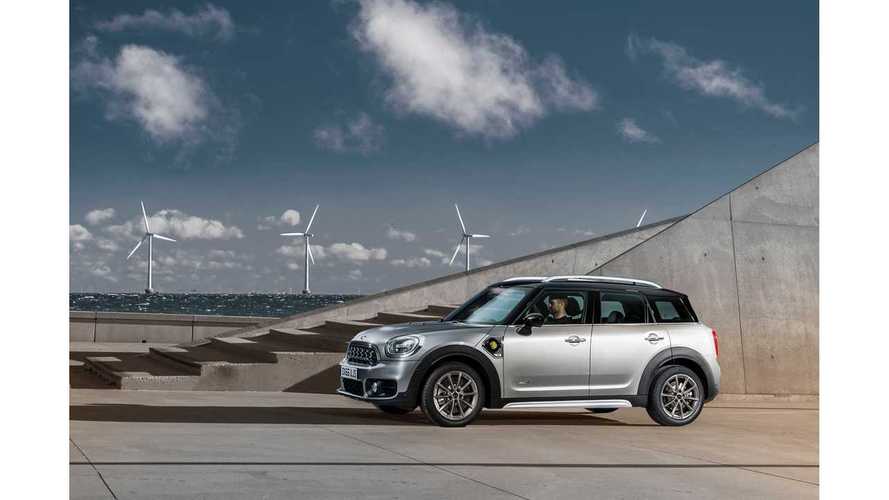 MINI has announced the unveiling of its first plug-in hybrid production model at the upcoming Los Angeles Auto Show, which opens to the public on November 18th (with doors open to the press on the 14th).

The MINI Cooper S E Countryman ALL4 will offer all-wheel drive and up to 40 km (25 miles) of all-electric range under undisclosed test cycle (using 7.6 kWh battery).  These numbers of course being stated on the NEDC rating protocol - in terms of real world driving, one could expect around 25 km/15 miles

The plug-in hybrid will also be offered as an additional version to the petrol MINI Cooper S Countryman ALL4.

About the new MINI Countryman:

As the successor to the first premium compact model of the brand, the new MINI Countryman has everything it takes to convey the enthusiasm of hallmark MINI driving fun to additional target groups in the future, too. This completely newly developed model is 20 centimetres long than its predecessor, has powerful proportions and in addition to the characteristic raised seating position, it provides considerably more space on its five fully-fledged seats and luggage compartment. The change of generation also exhibits clear advancements in the areas of versatility, sporty flair and premium quality.

In the US automotive market, there are two powerful petrol engines to choose from for the MINI Countryman, both of which are of the latest generation featuring MINI TwinPower Turbo Technology. Both engines can be combined with the new efficiency-optimised version of the all-wheel drive system ALL4. In addition, the new MINI Countryman is the first model of the British brand to be available with a plug-in hybrid drive. In the form of the MINI Cooper S E Countryman ALL4 it has a range of up to 40 kilometres running on electricity alone.

The unmistakable character of the new MINI Countryman derives not least from its powerfully expressive design and numerous innovative equipment features. In conjunction with the optional LED headlamps, the daytime driving light is produced for the first time by a band of light running entirely around each headlamp. The 8.8-inch colour display in the hallmark central instrument comes with the MINI navigation system Professional and now offers a new touchscreen function. Other new features include the MINI Country Timer, which registers travel over challenging terrain, the fold-out MINI Picnic Bench, which turns the loading sill of the luggage compartment into a comfortable seat for outdoor breaks, and the MINI Find Mate, which makes it easy for MINI Countryman drivers to locate bags, keys and other accessories.

The latest generation of John Cooper Works extreme athletes now also takes the premium compact segment by storm. The new MINI John Cooper Works Clubman combines its captivating spirit with top figures in terms of space, versatility and long-distance suitability. The stretched lines of the body, four side doors and characteristic split doors provide a contemporary interpretation of the tradition-steeped shooting brake concept, with five fully-fledged seats and a versatile luggage compartment on the inside.

In addition to its space concept, the engine concept of the new MINI John Cooper Works Clubman also makes it highly flexible. With the most powerful engine ever to be found in a MINI, the all-wheel drive system ALL4 as standard and suspension technology geared towards the very highest performance properties, it is both able to meet the diverse demands of day-to-day traffic and rise to the challenges posed by the race track. What is more, its exclusive design and equipment features set it clearly apart from the other model variants of the new MINI Clubman.

A contrasting paint finish for the roof and exterior mirror caps in the variant Melting Silver, exclusive bonnet stripes and deco elements as well as 17-inch light alloy wheels in MINI Seven two-tone design underscore the model's individual style on the exterior. Exclusive accentuations in the interior especially include sports seats in the fabric/leather combination Diamond Malt Brown, created specifically for the design model.