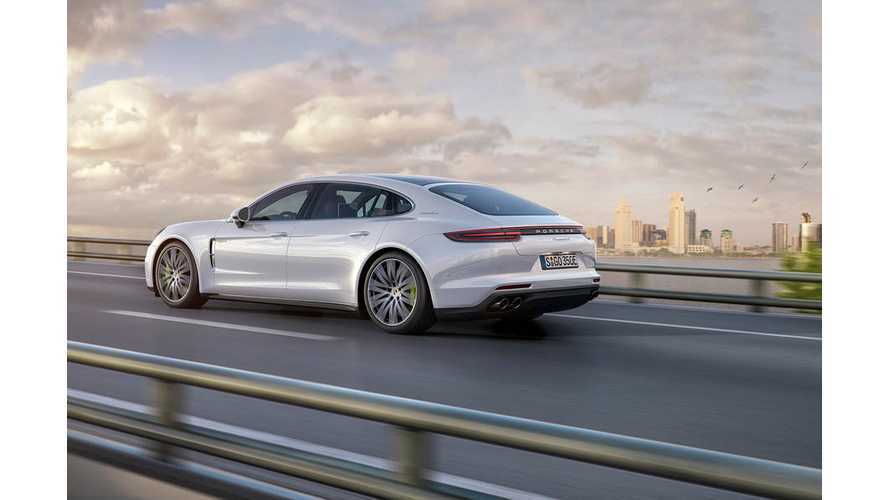 From the Los Angeles Auto Show, Porsche has launched a long-wheelbase version of its new Panamera 4 E-Hybrid plug-in.

The stretched wheelbase brings nothing new to the table in terms of powertrain (see full 4 E-Hybrid specs/details here), but the additional rear legroom is immediately obvious in this photo (below).

"Executive versions frequently used as chauffeur saloons in China and the USA, is the latest generation of Porsche Rear Seat Entertainment."

That rear legroom, via the extended wheelbase, surely adds some weight to the vehicle, so we expect a slight reduction in electric range of the standar wheelbase model, which we've previously discussed as having the following electric range:

"The German manufacturer states an all-electric range at 50 km (31 miles) under NEDC. The previous generation was rated at 16 miles EPA, so now we would expect up to 25 miles or so of “real world” driving range."

The 4 E-Hybrid Executive will go on sale in April 2017, though Porsche has not released info on availability at this point in time.

The powertrain spec remains the same.

The roll-up sunblind behind the headrests in the rear also comes as standard. The standard equipment of the Panamera 4S Executive and Panamera Turbo Executive is even more comprehensive: Among other things, both models benefit from rear-axle steering and soft-close doors.

As the most powerful model, the Panamera Turbo Executive is equipped with standard features such as four-zone climate control, LED main headlights including Porsche Dynamic Light System (PDLS) and ambient lighting.

As an option, all Porsche Panamera Executive models are available with a newly developed, large rear centre console, which can also be equipped with two integrated folding tables and an inductive antenna connection for an additional smartphone, depending on the market. Similarly to the existing Panamera models, the exterior of the Executive versions can be further individualised with a Sport design package.

Another useful equipment option, particularly for the Executive versions frequently used as chauffeur saloons in China and the USA, is the latest generation of Porsche Rear Seat Entertainment. The 10.1-inch displays integrated in the backrests of the front seats can be detached for a wide range of uses; when needed, they transform the rear of the Panamera into a fully digitalised workplace. The high-quality displays can also be used as tablets outside the vehicle."

Quick specs on the plug-in version of the Panamera Executive:

As for pricing, Autocar has some info, at least when it comes to the price in Europe:

That's quite a stretch in terms of price. This wide range of models position the Panamera to compete in multiple categories, including against the Tesla Model S.