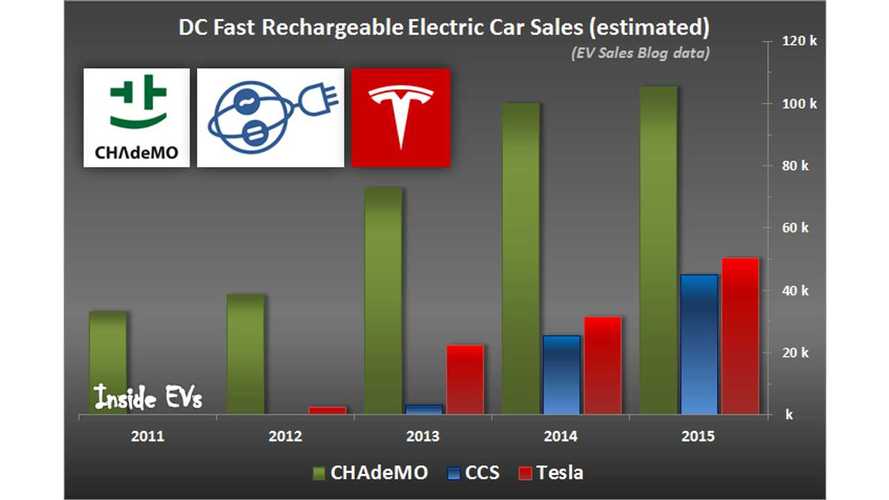 There are three main contenders:

While we note that there is no perfect data source for those plug-ins that are optioned with the DC protocol, EV Sales Blog has done a pretty good job estimating the numbers, and in general we are not so much focused on the numbers themselves, but rather on the trend.

Editor's Note: For this exercise we are omitting the Chinese GBT standard (which is growing the fastest of any DC charging protocol) due to it regionality.

Indeed, the growth of EV sales with different DC fast charging standard is interesting. Clearly the first big player in the industry was the Japanese CHAdeMO standard, supported heavily by Nissan. Mitsubishi also uses CHAdeMO, but their all-electric car sales have weakened over time, and the DC inlet in the Outlander PHEV isn't as important as it is for pure electric models (such as the i-MiEV). CHAdeMO leads, but now limps without broad support from the other manufacturers (outside Japan).

The race between Tesla Supercharging's dedicated solution and the newest addition to the field - CCS is more close.  Tesla sold the most electric cars from of any brand (outside of BYD in China), while CCS is now supported by the largest alliance of carmakers (and regulations in Europe) - who certainly are arriving late to the party, but are now also starting to arrive in force.

In other words in the next one to two years, we could see that all-three standards will be pretty close in total volume.