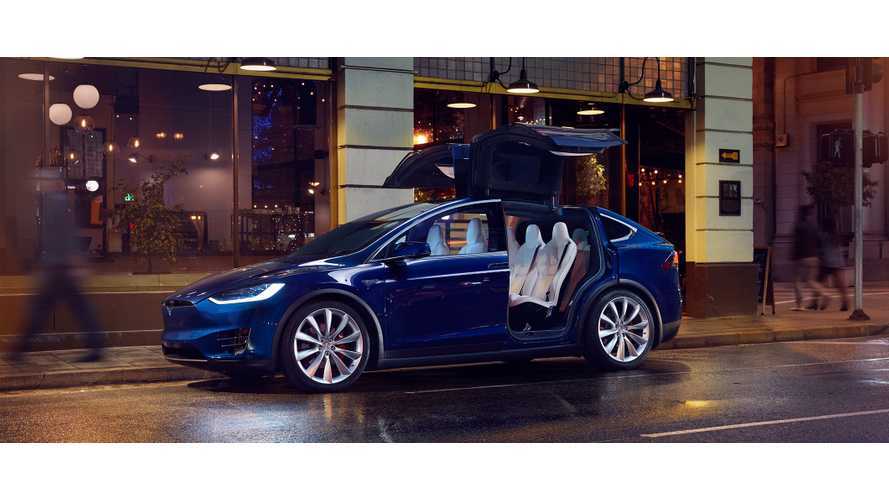 The Tesla Model X has picked up the Golden Steering Wheel for the  Best SUV of the year.  As a result, Tesla has put out a self-congratulatory blog post on the accomplishment (which one can read below).

With that said, the reaction to the award wind from one of our writers literally was:

"Never heard of that award but apparently its a thing..."

The reason for that comment might have been because it was via one of our US-based writers.

In actual fact, the award for "hottest and best new models" on sale in the European market has been given out for almost 40 years now, and is overseen by German media giant AutoBild.

"While the small crossover sector is relatively new, the more traditional large SUV market is still thriving. Innovative upstarts Tesla managed to secure the overall gong for its new Model X, beating out the Jaguar F-Pace and new Skoda Kodiaq.

The electric SUV rewrites the rulebook in every way, with a futuristic cabin, clever ‘Falcon Wing’ doors and, most importantly, the astonishing electric powertrain capable of powering it from 0-62mph in a mere 3.2 seconds in P100D form.  Despite this, it still manages to seat six and tow up to 2.3 tonnes."

In addition to Tesla's win, the BMW i3 also took home the award for "Best Hybrid/Electric Car".  Says UK's AutoExpress on its parent media's decision to recognize the BMW:

"It’s one of the oldest cars in this category, but BMW’s pioneering electric hatchback takes a Golden Steering Wheel ahead of new pretenders to the crown like the Hyundai Ioniq and Kia Niro.

New batteries for 2016 improve the i3’s electric range further, but the rest of the excellent package is unchanged. The stylish minimalist cabin, impressive performance, clever tech and desirability ensure the BMW i3 status as one of our (and your) favourite electric cars – it also won the UK choice award."

Almost 20,000 Model X Sales Have Been Made To Date

Despite the all-electric EV only having been in volume/mass production since around March, Tesla added a checklist of "the ways Model X has gotten better with time" while acknowledging the win.

Our commitment is to be best-in-class in safety, performance, comfort, and reliability in all of our vehicles. Model X is no exception. As we continue to accelerate the advent of sustainable energy, we invite you to visit one of our showrooms or request a stop from a Tesla mobile Design Studio near you.

Today, we are truly honored to announce that Model X has been awarded the Golden Steering Wheel (Das Goldene Lenkrad), one of the most prestigious automotive awards in the world. Candidates for this award are nominated by hundreds of thousands across Europe for excellence across six categories. The Golden Steering Wheel jury, composed of professional race car drivers, accomplished technicians, editors, designers, and digital and connectivity experts, then spent three days judging Model X.

This excellence did not come without its share of challenges early on. Model X is a complex vehicle to build, and its advanced feature set introduced some obstacles as we ramped production in early 2016. In the months since, we have introduced significant updates to make Model X an even better car. Most of these refinements have rolled out as over-the-air software updates, which enhance each vehicle regardless of when it was built. For the small number of improvements that are hardware-related, changes have rolled out to our early owners via priority Tesla Service. We have implemented those same changes in our factory immediately, because we do not believe in waiting for the next model year to introduce improvements to our cars.

As a result of this continuous improvement, Model X owners have seen a 92% reduction in reliability concerns over the past year. Nearly 20,000 owners are now experiencing the quickest, smartest, and safest SUV ever, with more than 90% of owners saying they would buy Model X again.