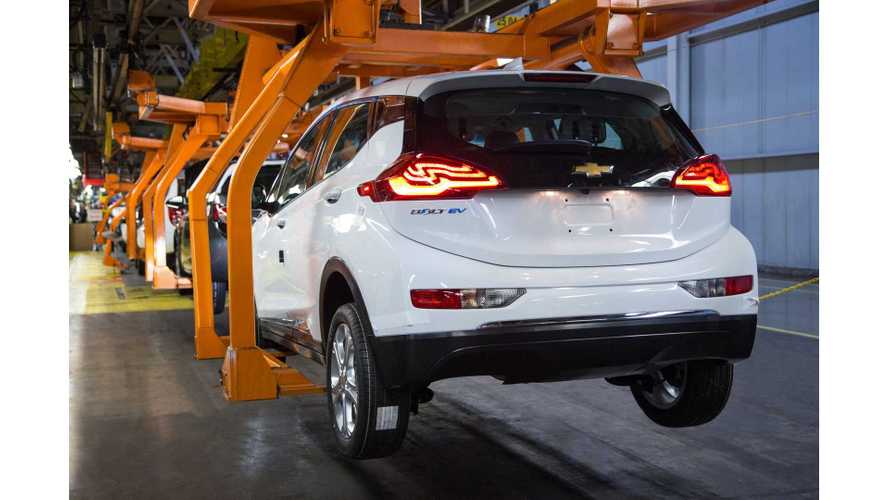 Despite their best efforts, General Motors has not been able to keep the production kick-off date under wraps very well for the electric Chevrolet Bolt.

In fact, we learned one year ago that this October would mark the start of production for the 200-plus mile Bolt. October was confirmed again just a few months ago.

We're now able to reconfirm this timeframe via Automotive News:

"Bolt EV: GM is scheduled to begin production of the 200-plus-mile EV in October. The initial annual production target is around 25,000 cars, which could include vehicles slated for export to China."

At least we know that the Bolt is still on track and that our assumption from a few months back is still accurate, despite General Motors immediately removing the Bolt's October start of production listing from the 2017 Fleet Guide (see image) upon discovering that the media got a hold of the document.

Though production will begin in October, we don't expect nationwide sales to commence before early 2017. GM previously issued this statement on distribution for the Bolt:

“We’re leveraging the strength of our dealer network and the relationships they have cultivated with their local customer base to manage the anticipated high demand for Bolt EV.

“While distribution plans are not yet finalized, we want to first satisfy demand in markets where EV acceptance is strongest.”

Our expectation is for (once again) a California, and CARB-friendly state roll-out, for the first few months beginning in late 2016/December.

As for the reports of EVs headed for China, we don't imagine there is any volume of significance leaving North America in 2017, other than a few thousand potentially delivered to Europe in the second half.