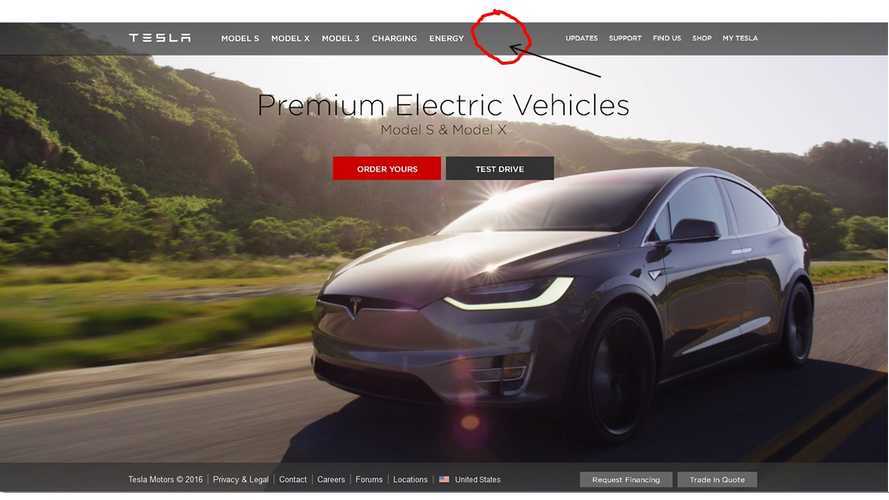 WANNA PLAY “FILL IN THE BLANK”?

As foreshadowed here, Tesla has quietly consolidated its web presence. Teslamotors.com now links to Tesla.com, instead of the other way around. Also, the company’s mission statement (full copy below) is now about sustainable “energy,” not just “transport.”

With this in mind, Tesla’s main page has a parking spot for a bright, sunny, two-syllable word starting with “S.”

We expect this and other blanks to be filled in when Elon Musk announces Master Plan Part 2.

Tesla’s mission is to accelerate the world’s transition to sustainable energy.

Tesla Motors was founded in 2003 by a group of engineers in Silicon Valley who wanted to prove that electric cars could be better than gasoline-powered cars. With instant torque, incredible power, and zero emissions, Tesla’s products would be cars without compromise. Each new generation would be increasingly affordable, helping the company work towards its mission: to accelerate the world’s transition to sustainable transport.

Tesla’s engineers first designed a powertrain for a sports car built around an AC induction motor, patented in 1888 by Nikola Tesla, the inventor who inspired the company’s name. The resulting Tesla Roadster was launched in 2008. Accelerating from 0 to 60 mph in 3.7 seconds and achieving a range of 245 miles per charge of its lithium ion battery, the Roadster set a new standard for electric mobility. Tesla would sell more than 2,400 Roadsters, now on the road in more than 30 countries.

In 2012, Tesla launched Model S, the world’s first premium electric sedan. Built from the ground up to be 100 percent electric, Model S has redefined the very concept of a four-door car. With room for seven passengers and more than 64 cubic feet of storage, Model S provides the comfort and utility of a family sedan while achieving the acceleration of a sports car: 0 to 60 mph in about five seconds. Its flat battery pack is integrated into the chassis and sits below the occupant cabin, lending the car a low center of gravity that enables outstanding road holding and handling while driving 265 miles per charge. Model S was named Motor Trend’s 2013 Car of the Year and achieved a 5-star safety rating from the U.S. National Highway Traffic Safety Administration.

In late 2014, Tesla CEO Elon Musk unveiled two dual motor all-wheel drive configurations of Model S that further improve the vehicle’s handling and performance. The 85D features a high efficiency motor at the front and rear, giving the car unparalleled control of traction in all conditions. The P85D pairs a high efficiency front motor with a performance rear motor for supercar acceleration, achieving a 0 to 60 mph time of 3.2 seconds – the fastest four-door production car ever made.

Tesla owners enjoy the benefit of charging at home so they never have to visit a gas station or spend a cent on gasoline. For long distance journeys, Tesla’s Supercharger network provides convenient and free access to high speed charging, replenishing half a charge in as little as 20 minutes. Superchargers now connect popular routes in North America, Europe, and Asia Pacific.

Tesla’s vehicles are produced at its factory in Fremont, California, previously home to New United Motor Manufacturing Inc., a joint venture between Toyota and General Motors. The Tesla Factory has returned thousands of jobs to the area and is capable of producing 1,000 cars a week.

The company is expanding its manufacturing footprint into other areas, including in Tilburg, the Netherlands, where it has an assembly facility, and Lathrop, California, where it has a specialized production plant. To reduce the costs of lithium ion battery packs, Tesla and key strategic partners including Panasonic have begun construction of a gigafactory in Nevada that will facilitate the production of a mass-market affordable vehicle, Model 3. By 2020, the gigafactory will produce more lithium ion cells than all of the world’s combined output in 2013. The gigafactory will also produce battery packs intended for use in stationary storage, helping to improve robustness of the electrical grid, reduce energy costs for businesses and residences, and provide a backup supply of power.

Tesla is not just an automaker, but also a technology and design company with a focus on energy innovation.