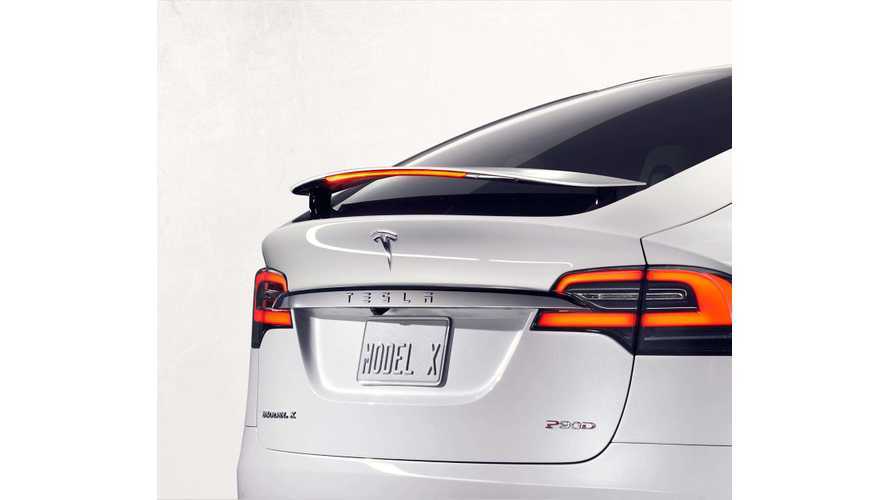 Tesla sent out an email today to the first ~2,700 or so buyers of the Model X, stating that a recall was in place for all of its SUVs delivered before March 26th, 2016.

The issue is specific to the locking hinge that enables the 3rd row seats to fold flat.  Tesla stated in its email to customers today (full text below) that 15-odd tests had been done on the mechanism without failure prior to launch in North America.

However as sometimes happens, when the all-electric SUV was to head to Europe, and a subsequent and in this case more-stringent) 16th test was made...and an issue arose.

The Model X "as is" is still technically a compliant/safe vehicle for North America, but Tesla still asks those receiving notification of the issue to "temporarily not have anyone sit in the third row seats while the car is in use"

As a result, a voluntary recall has been instituted by the company, and a fix already determined.

The recall will see the deficient 3rd row seat removed and the back portion replaced (with new units in production now).  Fortunately for Tesla, fault lies with the supplier Futuris, and they will be picking up the expense for the repair.

No live/on-road incidents have resulted/been reported due to this defect to date.  Jon McNeil, Tesla President of Sales and Service, expects the repair to take about 2 hours and he expects it will take the company about 5 weeks to complete the repairs to all 2,700 affected Xs.

"It's actually with the leverage of weight in the seat pulling it forward. So this would be an example of a front crash where the weight of the passenger seat belted to that seat could cause that latch to fail." - McNeil via CNBC

Here is that email to current Model X owners on the dedect in it's entirety:

We are emailing to inform you of a proactive action Tesla is taking to ensure your safety as a Model X owner. Tesla's internally conducted crash testing demonstrates that Model X will be the first SUV to receive the highest safety rating in every category, and we are committed to ensuring that it remains the safest SUV in the world.

Once At The Shop, Repair/Replacement Of The 3rd Row Seat Should Take About 2 Hours

Recently, during an internal seat strength test that was conducted prior to the start of Model X deliveries in Europe, the recliner in a third row Model X seat unexpectedly slipped. The recliner, which is provided to us by an outside supplier, is the locking hinge that allows the third row seat back to fold forward, and if a recliner were to slip during a crash, the seat back could move forward. Similar testing was conducted before the start of deliveries in North America, with 15 confirmation tests having been conducted without a single recliner failure. Despite these prior successful tests and no reports of a third row seat slipping in any customer vehicles, we have decided to conduct a voluntary recall as a precautionary measure and will be replacing all affected third row seat backs.

Our records show that you own a Model X affected by this voluntary recall. We will shortly send you an official recall notice by mail, but we wanted to alert you to this action as soon as possible.

A fix to this issue is already in place. We have worked with our supplier to develop a new recliner design with improved quality that resolved the issue. We are now constructing new third row seat backs to match all affected vehicles. Your service center will contact you to schedule the installation of your replacement seat backs as soon as they are available. Based on current production rates, we expect all replacements to be completed on a rolling basis over the next five weeks. We will accelerate this timing if possible.

Until the recall is performed, you may make full use of your Model X, although we ask that you temporarily not have anyone sit in the third row seats while the car is in use. We recognize that not having the use of your third row seats for the next few weeks will be an inconvenience, but your safety is our primary concern. We assure you that we are building your new seat backs as fast as we can.

Thank you for being a Tesla customer. If you have any questions, please contact us by phone at 844-248-3752 or by email at ServiceHelpNA@teslamotors.com. We apologize for this inconvenience.

For future owners of the Model X who currently are awaiting their new Tesla from the company's Fremont assembly facility, Tesla has sent out a similar notice acknowledging the issue, but also assuring customers that their Model X will not affected, stating:

"We want you to know that the Model X you configured is not affected by this issue. It is being built with updated third row seats that have the improved recliner design."