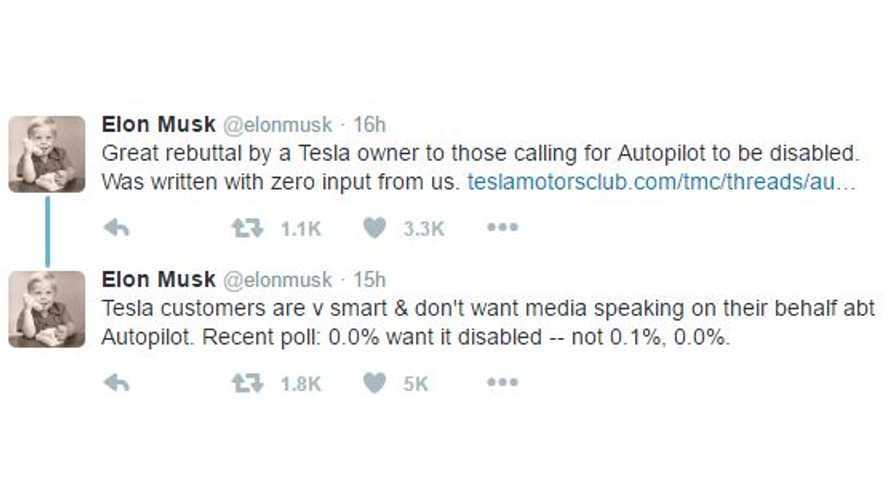 Elon Musk Tweeted a compliment in reference to a Tesla owner's rebuttal (on the Tesla Motors Club forum) to Consumer Reports' call to disable Tesla's autopilot feature. Musk included a link to the thread in his Tweet. He made sure to make readers aware that the forum post was not suggested or padded by anyone at Tesla.

As usual, Musk referenced the intelligence of Tesla owners and the fact that the media cannot and should not speak for them. He cited a recent supposed poll saying that absolutely no one wants the feature disabled.

We can only assume that he means 0% of Tesla owners polled. A responder asked, "Recent poll by whom with n=?". As of yet, there is no response from Musk or anyone.

The very well-written forum post uses clear lists to aid in understanding. It shares what NOT to do while utilizing the Tesla Autopilot technology. It also lists the reasons that Autopilot is useful based on the user's 18,000 miles of experience. He lists his "pleas" to regulators and insurers. His words to Consumer Reports, summarized in yet another list, are as follows:

For your four recommendations, the only one I agree is about consumer education. The other three:

a) Disable autosteer till hands on wheel are required - definitely NOT. Not only is it a huge step backwards towards achieving autonomous driving, it defeats the very purpose of reducing driver fatigue. The current version gives just about sufficient time to relax your posture and reduce fatigue.

b) Stop referring to as Autopilot - It meets the current widely used concept of autopilot and changing the name is not going to make it safer. People will still call it AutoPilot no matter what Tesla renames it too.

c) No more beta releases - test within the lab. Do you know of any automotive lab that emulates every single road condition? Is it even possible to create one?? Google has been trying to collect real life data from its own Level 3 cars on public roads. However, that approach has been a slow process, does not collect sufficient data and delays the significant advantages of autonomous driving. The practice of using beta testers from public is prevalent amongst several industries including healthcare. If consumers are willing to pay Tesla or anyone else to pay for emerging technologies, then don't brute force your way and cripple their rights.

The writer's conclusion sums it all up to Consumer Reports and other media outlets:

"STOP MISLEADING THE PUBLIC - REPORT ON FACTS AND DON'T MISUSE STATISTICS TO PROVE A POINT!!!"

Take the time, if you may, to read the entire post at the link below. It is very compelling.