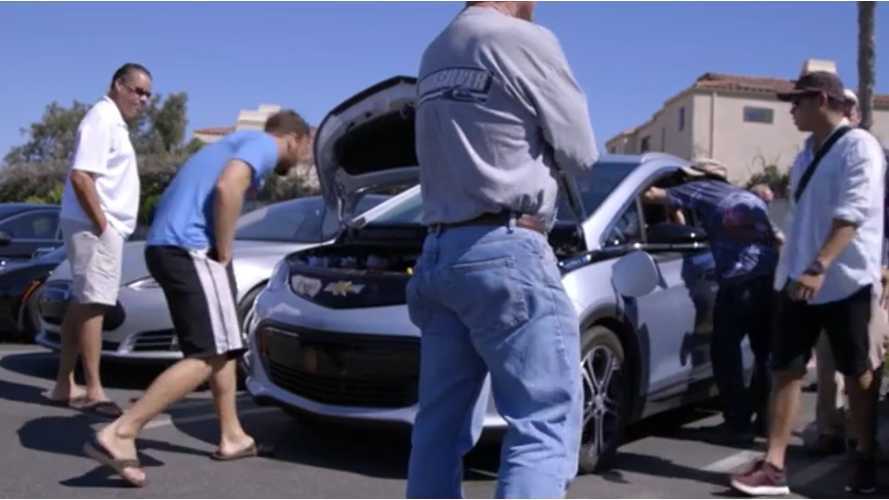 On the occasion of Motor Trend having short-listed both of the all-electric vehicles as finalists for the 2017 Car of the Year Award, they took a brand new, upcoming Bolt EV to the Orange County Tesla Club faithful to get their honest opinions.

And for the most part (as one would expect from EV drivers) Tesla owners were very gracious, complimenting the car's unexpected regenerative braking abilities, back-seat space; quite often saying they preferred the package over the current Nissan LEAF and Chevrolet Volt.

As for the quibbles, the lack of built-in GPS was considered a pain, and the inability to hold certain regen settings was noted as a drawback.

"It felt like a very high end vehicle for a package for around thirty grand.   If I was in the market...when I  I bought my Model S - I needed an EV that needed over 200 miles.  I definitely would been looking towards a Bolt, as compared to spending the money for a Tesla."

Not unexpectedly, comparisons to the Tesla Model 3 (expected to be released in the second half of 2017) were also made, as the Bolt EV will be in direct competition with that model.

"I think it will be appealing to different buyers.  It's the same amount of money, but the buyers that are looking to buy a Model 3 are looking to get it because 'oh yeah, it's a Tesla' - well Tesla now is more of a luxury brand."

And while we noticed that all the Model S owners were quite loyal to the brand, and personally weren't considering trading in their Teslas for a Chevy any time soon, the common theme seemed to be that they knew of a family member or friend considering an EV, or even a Model 3 purchase in the future - to which they would now also suggest the Chevy Bolt EV as a contender

...so GM has to be fairly happy with that result.

Also of interest:  Read up on Motor Trend's interaction with Tesla brass, including Tesla’s chief designer Franz von Holzhausen, at the company's Hawthorne Design Studio after having brought some Chevrolet Bolts to their front door.

“OK, we’re going to do it,” I insisted. “We’re going to drive into the Tesla Design Studio next to SpaceX, park the two Bolts at Supercharger stations, and see what happens.”

Spoiler: it was a positive reaction.   (Hat tip to Miggy!)