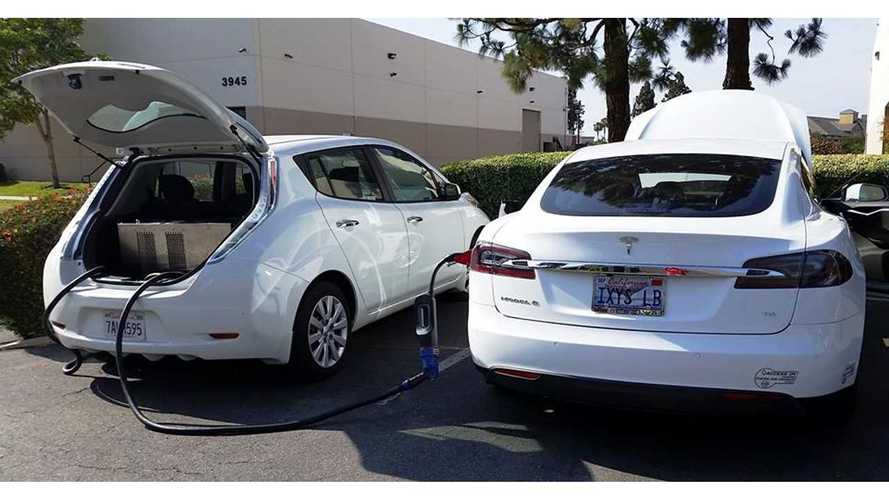 Trying to find a necessity for its V2V ORCA INCEPTIVE on-board CHAdeMO to CHAdeMO charge system (kinda just rolls off the tongue doesn't it?), Andromeda Power demonstrates how the Nissan LEAF could rescue a Tesla Model S.

However, it seems like a lot of work and equipment to make the energy flow between cars.

First you begin with a Nissan LEAF and its CHAdeMO inlet, but then to discharge LEAF you need to use a CHAdeMO bi-directional charger and have V2V ability.

ORCA INCEPTIVE then sends DC power out through the CHAdeMO system to the... CHAdeMO Tesla adapter. Enabling the Tesla Model S to get a fractional charge.

The real problem here of course is that Tesla Model S has more than 2 or even more than 3 times battery capacity than the LEAF, and most likely the LEAF has traveled from somewhere (and has somewhere to go after the booast), needed to retain some of its own capacity.

So basically...we believe it will be a pretty rare sight to see a Nissan LEAF (with spare kWhs to burn) rescuing a stranded Tesla Models S.  Our hunch is that a Tesla owner would rather just catch a tow to the nearest charge point if somehow they found themselves out of power for some unknown reason.

But if you ever need this feature, Andromeda Power even provides a smartphone app for the process.

Here is an earlier video of the system in action between a couple LEAFs: