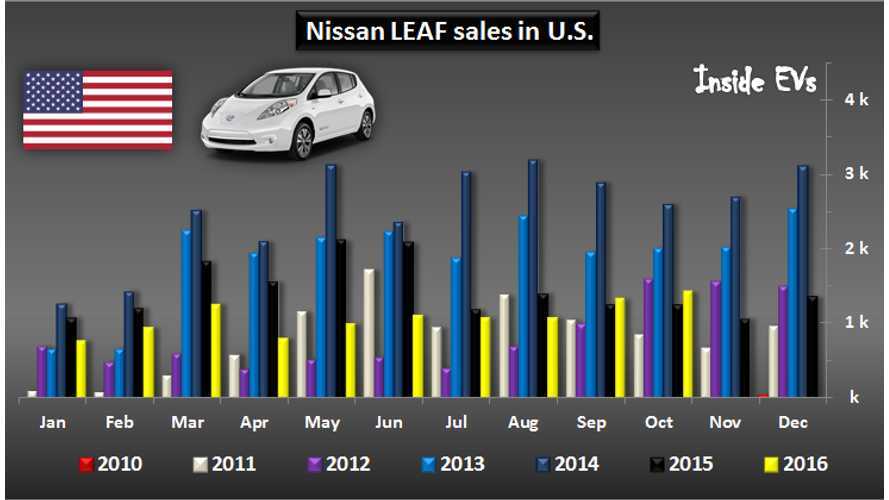 Nissan LEAF noted its second month of growth this year, after 20 months of registering year-over-year decreases.

We should note that the Chevrolet Volt was three months quicker to six figures than the LEAF, as both models had been racing to 100,000 since their debut in December of 2010. The Volt tally currently stands at 107,267.

On the other hand, Nissan can still boast that the LEAF is the first all-electric car (or zero emission if you will) to hit 100k - meaning there is no petrol engine on-board, as is the case of a plug-in hybrid.

More recently however as more plug-in offerings have arrived to market, LEAF sales in the U.S. have weakened; and this despite the arrival of an upgraded 30 kWh version in late 2015 that did virtually nothing to arrest its fall.

That said, Nissan is all too aware that the LEAF has grown long in the tooth, and needs some serious upgrades - which although still unannounced, will be arriving soon.  (Waves to the US autoshow season!)

Once on the market, it is quite likely that either the upgraded Nissan LEAF, or Tesla Model S (which currently stands at just under 85,000 sales), will be the first plug-in to reach the 200,000 mark in the US.

The current sales leader Chevrolet Volt, has posted solid but unremarkable results in its 2nd generation form since its debut 13 months ago (averaging close to 2,000 units per month, but mostly lower numbers than from its 1st generation results in 2012 and 2013), which has allowed it to pass a dated version of the LEAF that overstayed its welcome.

At this point the 2nd gen Volt is unlikely to breakthrough to the wider/mainstream market, at least to an extent greater than it already has - at least without some drastic product or pricing changes; while the monthly sales ceiling for the Tesla Model S has proven much higher (notching around 4,000 units three times in 2016 already), and the potential new ceiling for a upgraded/new LEAF is, as of yet, still unknown.