Mitsubishi Sold Over 21,000 Outlander PHEVs In Two Years In the United Kingdom 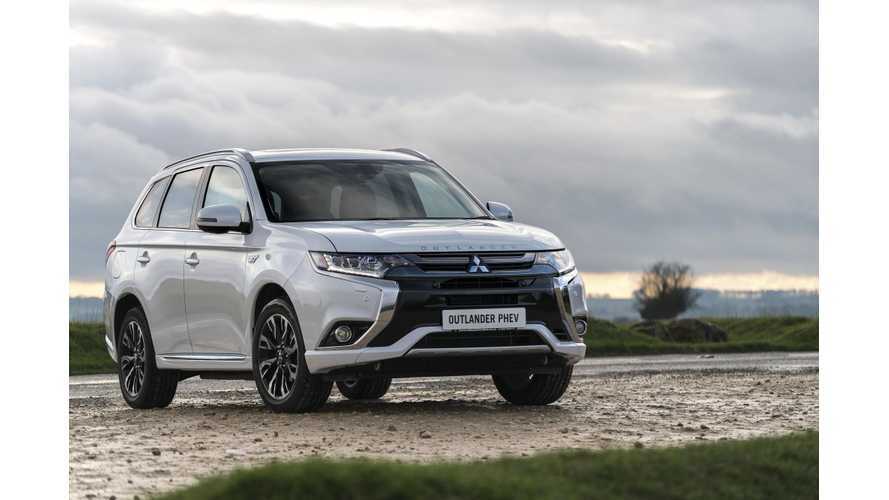 Mitsubishi is this month celebrating a full two years since the introduction of Outlander PHEV in UK in April 2014.  A very wise decision for Mitsu it would seem.

The Japanese plug-in hybrid SUV has quickly become the main choice for British consumers, and by the end of March, a total of 21,053 plug-in Outlanders were put on the roads.

According to the Mitsubishi, in the first quarter of this year, over half (52.3%) of 7,468 plug-in hybrids registered were Outlander PHEV (around 3,900).  That is what you call a dominant market position.

"Launched on this day back in April 2014, the award-winning Mitsubishi Outlander PHEV has effectively defined the emergence of the UK's plug-in hybrid sector. In 2013, the year before its arrival, the total plug-in hybrid market across all marques stood at just 989."

"In two short years Outlander PHEV sales have overtaken every other plug-in hybrid and pure electric car, even passing vehicles that have been around since 2011 such as the Nissan Leaf.

The Outlander PHEV has become the UK's number one choice.

It’s not difficult to see why it is proving so popular. It boasts impressive fuel economy and ultra-low emissions – in a vehicle with the go-anywhere ability of four-wheel-drive. Combining electric and petrol power it has a range of 541 miles - 32 miles in electric mode alone, which is more than enough to accommodate the average daily commute.

As well as its official fuel consumption figure of 156 miles per gallon, the Outlander PHEV’s low emissions of just 42g of CO2 per kilometre mean there’s no vehicle tax to pay. It is exempt from the congestion charge and it qualifies for the Government's £2,500 plug-in car grant. In addition, company car drivers can reap the reward of low Benefit in Kind tax (BIK), meaning a virtual pay rise of several thousand pounds per year."

‘Introducing new technology is very challenging and to sell over 21,000 Outlander PHEVs in the first two years has been an incredible achievement.

‘People are being increasingly attracted to environmental vehicle performance and the economy it delivers. However they still want to have a car that is great to drive and doesn’t cost significantly more than an equivalent traditional petrol or diesel powered car.’