New Renault ZOE Priced In UK - Both As Outright Buy, Or With Battery Rental 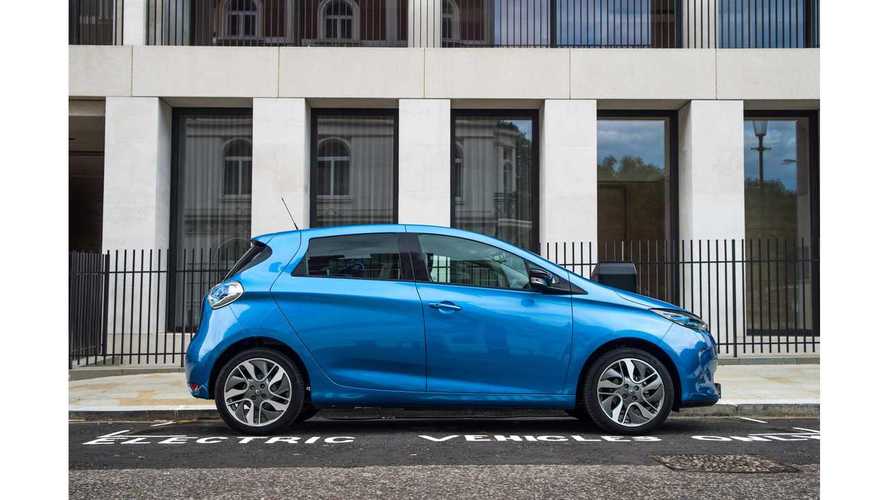 A full detailed table with all the pricing options and trim levels can be found below. The first deliveries of the ZOE Z.E. 40 is to begin for the UK in January of 2017.

The range of the Z.E. 40 is rated at about 250 miles (400 km) under optimistic NEDC conditions, but Renault itself expects a real world range of 186 miles (300 km) or even ~124 miles/200km  in extreme cold conditions.   We appreciate the straight forward range advice from the company in Europe, where often only the NEDC rating is promoted.

A nice addition to the ZOE package in the UK is a free 7 kW charging wall-box. The standard ZOE itself is ready for up to a 7 kW single-phase boost, or alternatively up to a 22 kW three-phase charge (the Q versions accept 11 kW and 43 kW charging respectively).

In table below you can also find how charging times vary between the R90 (longer range, 22 kW charging) and Q90 (shorter range, 43 kW charging) versions.

For those for require something special, Renault has prepared a new top-of-the-range Signature Nav trim level.

RENAULT ZOE ARRIVES IN THE UK WITH 250 MILE RANGE

Renault UK is announcing pricing and specification for the 2017 model year Renault ZOE that was recently unveiled at the Paris Motor Show, complete with the new Z.E.40 battery that has a 250 mile (NEDC) range – the longest range of any mainstream electric vehicle.  A new top-of-the-range Signature Nav trim level has been added to the ZOE line-up for the 2017 model year which goes on sale today and will arrive in UK showrooms from January 2017.

With a 250 mile (NEDC) range, ZOE offers the best range of any mainstream electric vehicle. In real-world driving, Renault estimates the ZOE fitted with the new Z.E.40 battery has a real-world range of between 186 miles in temperate conditions and 124 miles in extreme cold conditions.

ZOE is now offered with a choice of two batteries – the new Z.E.40 battery and the existing 22kW battery.  The entry level Expression version comes with the 22kW battery whilst Dynamique Nav and above are offered with the new Z.E.40 battery enabling owners to choose a ZOE that suits their individual requirements.  The Z.E.40 battery is available with an optional Quick Charge facility that reduces charging times even further.  All ZOEs sold to private customers are supplied with a fully-installed 7kW fast-charging box that enables convenient charging at home.

The updated ZOE is being expanded to a five-version line-up based on three trim levels familiar to owners of other Renault vehicles – Expression, Dynamique Nav and the new top-of-the-range Signature Nav.  ZOE remains available to purchase with a monthly battery lease agreement or outright with no battery lease agreement.

Renault’s Z.E. Connect app allows drivers to remotely monitor battery levels and charging status via their smartphone or computer. The ZOE Expression is available with the R90 22kW battery enabling a range of 149 miles (NEDC) and a charging time of 3 to 4 hours (0 to 80 per cent full).

ZOE keeps occupants safe with a five-star Euro NCAP rating and standard safety features such as ESC with traction and understeer control, Hill Start Assist and front and side driver and passenger airbags.

The ZOE Dynamique Nav adds to the Expression specification with a hands free keycard, automatic lights and wipers, rear parking sensors, rear electric windows and electrically operated, heated and folding door mirrors, 16-inch ‘Black Shadow’ alloy wheels and a leather steering wheel and gear lever.  In addition to the Z.E. Connect app, the Dynamique Nav benefits from a one-year subscription to the Z.E. Interactive app.  Via a smartphone or computer this allows you to remotely charge your ZOE and schedule charges, as well as cabin temperature pre-conditioning, in order to maximise convenience and take advantage of available off-peak electricity rates.

ZOE will be available in three new colours for 2017 – Mars Red, Titanium Grey and Ytrium Grey (available on Signature Nav only) complementing the Zircon Blue metallic added in 2016.  The Renault logo and badging switches from blue to chrome to accommodate this new colour selection.  The 16-inch alloy wheel design on Dynamique Nav and above has been changed.

Regardless of trim level, the ZOE is available to purchase in two ways. Buyers can lease the battery on a monthly basis.  Battery lease payments are banded and reflect estimated annual mileage ensuring ZOE drivers only pay for what they need.  They start from as little as £49 per month.  New for 2017 is the ‘Unlimited’ option, that has no mileage cap, and is priced at £110 per month.

Alternatively, ZOE can be bought outright, including the battery, and therefore have no monthly battery lease payments.  Full purchase versions that include the battery are denoted by their trim level names: iExpression, iDynamique Nav and iSignature Nav.

Every ZOE purchased by a retail customer includes a Z.E.-ready 7kW fast-charging wall-box with free home installation – owners will be able to charge a ZOE from flat to 100 per cent full in as little as three to four hours, depending on version.

Z.E. Trip makes long-distance driving a breeze in the ZOE by allowing drivers to locate all public charging points in many European countries. The app can be accessed directly via the Renault R-LINK navigation system using the steering wheel-mounted controls or via the internet to prepare trips in advance. Z.E. Trip indicates the real-time availability of each charging point, as well as its type and whether it is compatible with the car. The driver can select a charging point based on its charging capacity so the speeds suit their requirements. Z.E. Trip will be rolled out in the UK during 2017.

The Z.E. Pass app makes charging easier at most public charging points in Europe even though they are owned by various operators. The driver can pay using the specific smartphone app or with one RFID badge. They can also locate available charging points and compare prices at different points nearby using their smartphone or tablet without having to be a registered member of each network. Developed in association with Bosch, the Z.E. Pass service will be rolled out in the UK during 2017.

Developed in close partnership with LG Chem, the battery uses high-energy density lithium-ion technology. Renault and LG engineers have succeeded in increasing storage capacity without making the battery any bigger or a lot heavier. It was optimised by working on the chemistry of the cells in order to increase their energy density, rather than stacking additional battery modules, a commonly used technique. This major new technology has been developed while ensuring the battery’s reliability and safety.

The battery’s large storage capacity ensures longer range for the ZOE thanks to the meticulous work that went into integrating the battery in the vehicle. The electronic management system of the battery optimises the ZOE’s energy use on the move, while the new air circulation system maintains the temperature of the ZOE’s battery at a constant level, making the car economical to run in very hot or very cold weather.

To complement the new battery, the ZOE motor has undergone a naming restructure, moving from being related to range (in kilometres) to power output (in horsepower) to match internal combustion engine vehicles, as follows:

Renault designed and makes the ZOE with the expertise it has acquired as a pioneer in the world of electric-vehicle mobility and as Europe’s number one electric-vehicle brand, as well as its technical and sporting partnership roles in the FIA Formula E Championship – Renault e.Dams are two-times winners of the electric motor racing championship.

Like the 22kWh battery, the new Z.E. 40 battery is assembled at Renault’s Flins plant, near Paris. The same factory is responsible for the production of the Renault ZOE, alongside the Renault Clio. The ZOE was designed and engineered at the Renault Technocentre in Guyancourt, near Paris.

The R90 motor is made at Renault’s Cléon factory in Normandy, a flagship facility in the field of engine and transmission production for Groupe Renault. Launched in the spring of 2015, and originally known as the R240, this motor was entirely developed by Renault and led to the filing of 95 patents.

All versions provide the peace of mind of Renault’s 4+ Z.E. warranty and assistance package. The car is protected by Renault for four years or 100,000 miles (first two years have no mileage limit). For Z.E. vehicles with a Battery Hire Contract, the Renault Assistance cover is linked to the period of the Battery Hire. In the event of a breakdown even if you run out of charge, Renault provides emergency roadside repairs or repatriation 24/7 every day of the year, plus three years’ European cover. There is also a three-year paint warranty and 12 years’ cover against corrosion.

The ZOE has been awarded the title of What Car?’s ‘Best Electric Car under £20,000’ for the last three consecutive years and was recently named ‘Best Supermini’ in the Auto Express Driver Power 2016 survey, coming second overall out of 183 vehicles.  ZOE was named a Which? ‘Best Buy’ in August 2016.