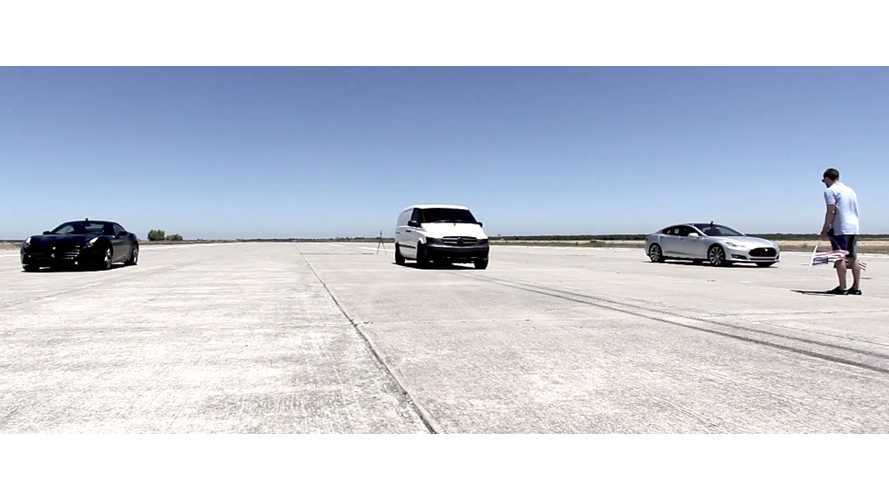 California-based and Chinca-backed Atieva unveiled its powertrain test vehicle "Edna”, which happens to be a converted to electric drive Mercedes-Benz Vito commercial van.

Which is exactly the same system being readied for the upcoming Atieva sedan, expected on the market around 2018. Initial production capacity is said to be 20,000 cars annually.

"Developing a car and a company from scratch is an exciting and challenging opportunity. There are many ups and downs along the way and we intend to share details with you in this blog as they develop.

One of the “ups” presented itself at a recent series of tests we were performing on Edna, our powertrain testing delivery van. Edna features a prototype version of the powertrain we are developing for our sedan. The spacious van package allows Atieva engineers to retrofit the vehicle with Atieva powertrain components with as little modification as possible.

Under Edna’s skin are two electric motors, two sets of power electronics, two gearboxes, one battery capable of storing 87 kWh of energy and outputting over 900 horsepower, plus all of the software to make the components play nicely together. With Edna we are able to test various aspects of the powertrain system, including motor control algorithms, regenerative braking behaviors, accelerator pedal feel, and cooling strategies, to name a few.

Edna can often be seen testing on public roads, but occasionally we visit a closed course for tests that cannot be performed safely on public roads. During a recent test session we brought a couple of other cars along to see how Edna would match up in a race. With ample power on tap, Edna was able to overcome her significant weight disadvantage to take the win on repeated runs.

While the race was an opportunity for the team to have some fun, Edna has more tricks up her sleeve than just straight-line acceleration. Enjoy the quick video and stay tuned for more information over the coming months."

A recent Reuters's article reveals background on the Atieva, which was founded by Bernard Tse, an ex-Tesla Vice President and board member. The other well known person associated with Atieva is Peter Rawlinson - previously engaged at Tesla leading engineering of the Model S, now serving as Atieva's Chief Technology Officer.

"Atieva has raised several hundred million dollars from investors including Mitsui & Co Ltd(8031.T), the Japanese trading giant, and Venrock, a Silicon Valley venture capital firm connected with the Rockefeller family that once funded Intel and Apple."

"Two of Atieva’s biggest shareholders are Chinese: State-owned Beijing Auto and a subsidiary of publicly traded LeEco, an internet company that has also declared it intends to offer an electric car. LeEco is controlled by Chinese tech entrepreneur Jia Yueting."