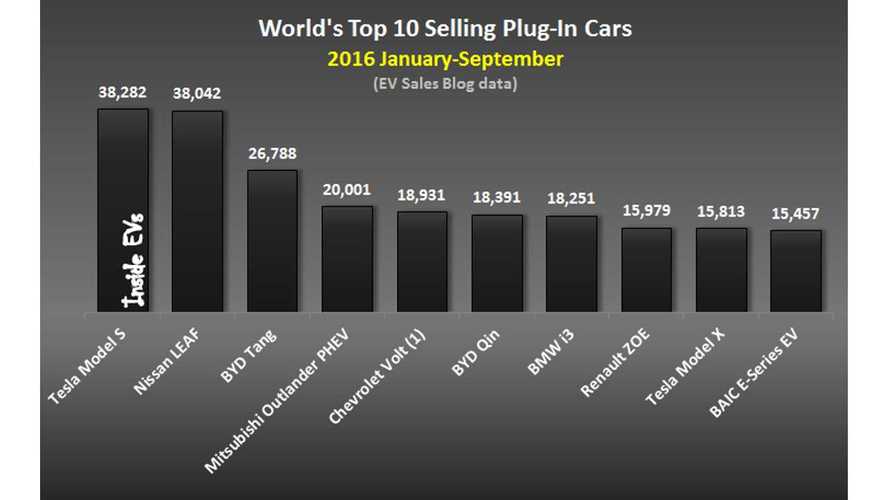 For September, a lot is going on in the model rankings, as the Tesla Model S climbed to the very top, thanks to a push by the company to achieve some huge Q3 goals during the last month of the quarter.

On a monthly level, and without the Prius Prime being available in volume until 2017, no other EV looks to be able to come close to the nearly 8,000 sales last month by Tesla, so the Model S should take home the best single month result for 2016.

The Nissan LEAF with 3,500 sales clearly was not able to remain the best selling EV for the month, and even slipped off the top spot in the YTD chart.

While we expect the LEAF to re-take the top spot after all of October's results are tallied in a few weeks (due to Tesla's tooling for new enhanced self driving hardware, and subsequent/temporary slowing of deliveries during the month), the only real hope for the LEAF to 'win the year' is for the upgraded version (with a longer range) to be made available in December in a big way (don't count on it)...or for Nissan to discount all available older inventory remaining worldwide heavily.

The BYD Tang also didn't shine like it had in the past, but will have no issues holding onto third place to close out the year.

Overall, the big news is the nearly 5,500 sales of Tesla Model X, which now quickly breaks into Top 9 as a result.  The all-electric SUV for Tesla has a shot at passing the Chevrolet Volt for 5th overall by year's end, and perhaps #4 if Mitsubishi hits another roadblock with the Outlander PHEV as it has earlier this year.

Another model, which has an appetite for a better position (with the addition of a longer, range 33 kWh battery) is the BMW i3 - which sold over 3,500 sold in September.

Also of note: Tesla Motors also sold a record of over 13,000 EVs in September, which is the best result ever, by any automaker of plug-ins.