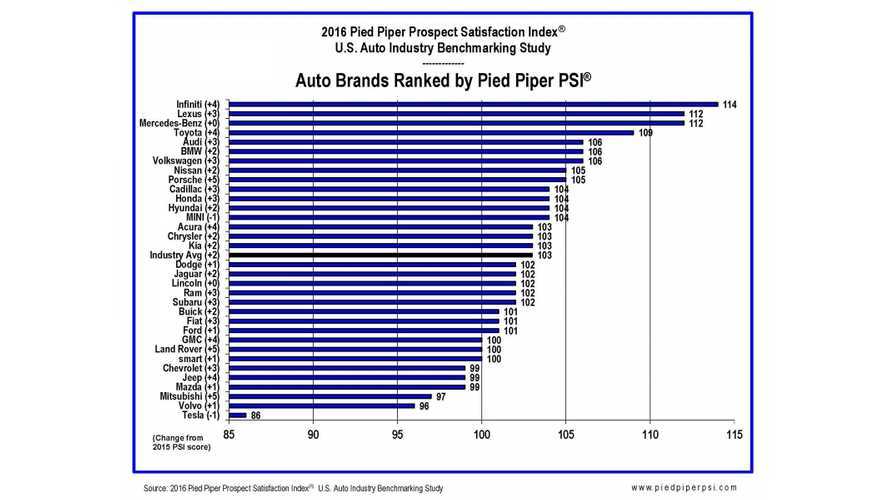 This year’s Pied Piper Prospect Satisfaction Index, a study by automakers that "measures how well dealerships follow sales processes, such as asking qualifying questions and ultimately asking for the sale" has ranked Tesla dead last.

“Tesla leaves me scratching my head. They own all of their stores, so you would think each one would be doing the same thing. But they’re not. Tesla is consistent in its inconsistencies.”

Basically, O'Hagan is saying that some Tesla stores perform well, while others falter big time.

For example, a few Tesla dealerships do all the right things.

But such good habits are outweighed by lackings mystery shoppers found at most other Tesla stores where the staffers tended to act like “museum curators."

They spoke knowledgeably about the products and answered customer questions, but shied away from asking for the sale in an ill-advised demonstration of underselling.

Most Tesla stores failed miserably in the trade-in department. The study shows that only 36% of Tesla sales people asked if the buyer had a trade-in. This is compared to 86% industry-wide. O'Hagan explains that trade-ins are a hassle for Tesla because the vehicles can't be sold at Tesla stores.

Overall though, O'Hagan notes that automotive dealers have vastly improved in the past 10 years:

“There is no question the typical dealership sells more effectively today. However, plenty of variability remains. We have watched some brands completely change the way they sell, while others sell today no differently than they did 10 years ago.”

Meanwhile, Tesla has ranked dead last in this study for the past 3 years and has declined in ranking year-over-year.