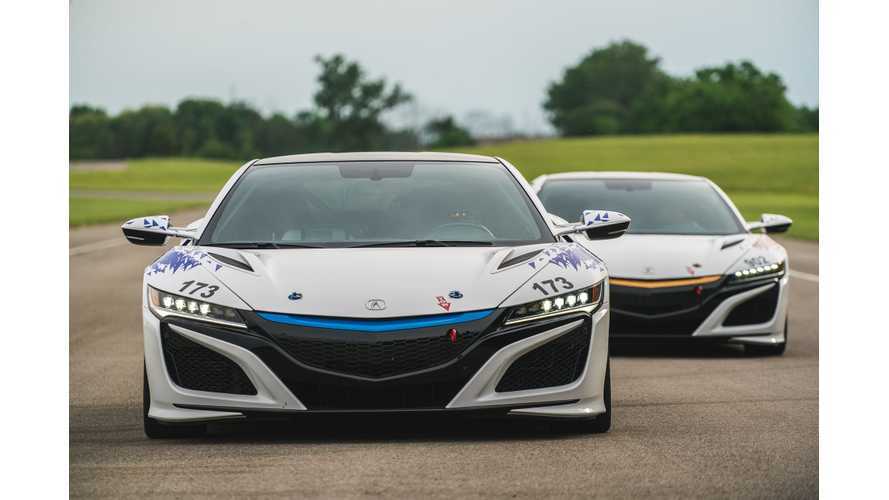 The Honda/Acura NSX is currently in production in the U.S.

The standard version of the car comes as a non-plug-in hybrid, with a twin turbo 3.5-liter V6 and three electric motor setup. Total HP is listed at 573.

However, at Pikes Peak, Honda entered a special pure electric NSX and now the automaker is considering developing a similar such car for public consumption.

"According to NSX project boss Ted Klaus, Honda is contemplating convertible, lightweight, non-hybrid and all-electric versions, one of which is set to wear the Type R badge."

"Honda entered a lightweight version of the NSX in the recent Pikes Peak rally event in the US, and Klaus said it was “the general direction we wish to go” with the NSX."

"He added that making a “more pure, simplified version” was “in some ways more straightforward” and that there was “an appetite for it” within Honda."

This would imply that Klaus is looking at a pure electric NSX setup, due largely to its simplicity, but there's also a chance Honda may go the other direction by ditching the hybrid setup in favor of only a gasoline engine. That would seem to be against the grain of what most other automakers are pushing for these days, but it's still a possibility.

The NSX that ran at Pikes Peak was a four-motor electric car.  Not simple at all and not likely the direction Honda would take with the production electric NSX.

"Honda also entered an all-electric version of the NSX at Pikes Peak, with four individually controlled electric motors. Klaus said the team wanted to investigate torque vectoring while testing battery durability and power electronics, which are two other engineering obstacles standing between the car and production. “There are other technical issues to solve, but that’s why we had one there,” he said."