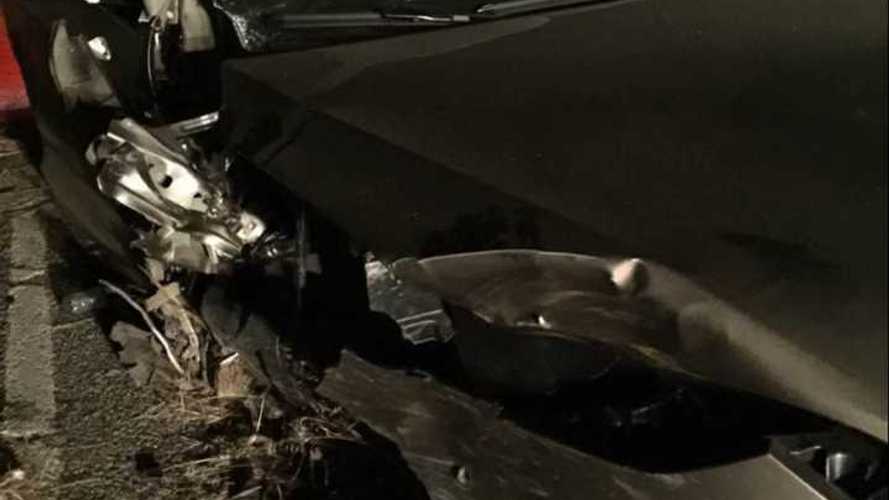 Autopliot is again being indicated potentially at fault for a wreck involving a Tesla Model X that reportedly veered off the road, hit a guardrail held up by wooden stakes and then plowed through a fence and stopped somewhere out in the open field.

However, Autopilot was misused in this situation, as the system is not designed for non-divided, two-lane roads like that one pictured below where the wreck occurred.

"Both 2 people on car survived. It was late at night, Autopilot did not detect a wood stake on the road, hit more than 20 wood stakes, tire on front passenger side and lights flyed away. The speed limit is 55, he was driving 60 on autopilot. His car is completely destroyed. The place he had accident does not have cellphone signal, it is 100 miles from the hotel. We are on a 50 people Wechat messenger group. I woke up today saw he managed to get internet to ask people in the Wechat group to call Tesla for assistant."

The driver (Mr. Pang) told CNN he wasn't actually sure whether it was the car's fault or his.  The news organization said the drive was "eager to talk to Tesla and learn why the car swerved off a narrow Montana road" and that "Pang said he did not receive any warning from the car that he was in danger and needed to act, adding that the warnings from his car were in English, and that he speaks Mandarin."

The incident resulted in a traffic citation being used to the owner for careless driving following the accident.

Tesla Statement on the incident (via Electrek):

“This vehicle was being driven along an undivided mountain road shortly after midnight with autosteer enabled. The data suggests that the driver’s hands were not on the steering wheel, as no force was detected on the steering wheel for over 2 minutes after autosteer was engaged (even a very small amount of force, such as one hand resting on the wheel, will be detected). This is contrary to the terms of use that are agreed to when enabling the feature and the notification presented in the instrument cluster each time it is activated.
As road conditions became increasingly uncertain, the vehicle again alerted the driver to put his hands on the wheel. He did not do so and shortly thereafter the vehicle collided with a post on the edge of the roadway.
Autosteer, which is enabled via the Driver Assistance tab under Settings, is best suited either for highways with a center divider or any road while in slow-moving traffic. We specifically advise against its use at high speeds on undivided roads.
That said, provided the driver remains alert, it will still be safer than a person driving unaided, as people are sometimes distracted or may become unable to operate the vehicle, due to falling sleep, fainting or experiencing a medical emergency. After either high lateral acceleration from a sharp corner is detected or there is no force on the steering wheel, the vehicle gradually reduces speed, stops and turns on the emergency lights.”

Moral of the story...don't use Autopilot how and where Tesla says you shouldn't. The system is not designed for use in this situation and therefore can't be blamed for causing the crash.