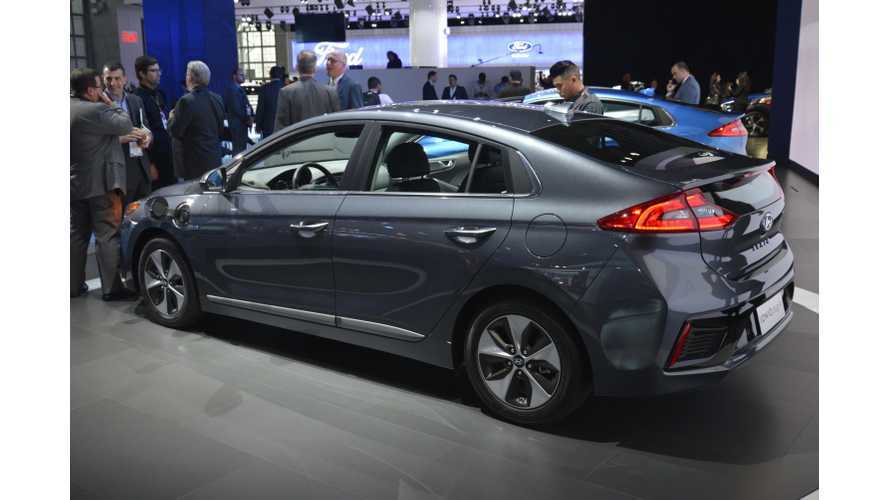 The South Korean carmaker, that consist two brands - Hyundai and Kia, plans to leapfrog to the front of the industry's pack and compete with Toyota.

"It's a risky but necessary gambit. After years of trailing in electrification, Hyundai and Kia see no way of meeting future emissions rules without harnessing the power of electrons.

The rollout covers several nameplates already on sale or heading to lots soon. From Hyundai, they include the Sonata Hybrid, Sonata Plug-in, Ioniq Hybrid, Ioniq Plug-in, Ioniq Electric, Grandeur Hybrid and a fuel cell version of the Tucson. The Grandeur is sold in the U.S. as the Azera, but slow sales there make it unclear whether the next-generation Grandeur will come to U.S. showrooms.

Hyundai-Kia is aiming to become No. 2 volume player second only to Toyota to which the distance is too far to catch (with some ~1.2 million hybrids and plug-in hybrids sold in 2015).

According to the article Hyundai could be at 300,000 annually by 2020. Only part of those will be plug-ins.

An interesting point of discussion is the universalization of drivetrain components to cover all models with only minor changes:

"For example, all our electric motors have the same diameter," Lee said. "The power output is different, but we can just adjust the width of the core winding. Or for the motor controller, we standardized to use the same printed circuit boards."

While each nameplate generates modest volume of up to 20,000 units, volume expands beyond 100,000 on a component basis, he added

"Except for Toyota, () can achieve some competitiveness against other companies," Lee said."

Asked about profits, Lee Ki-Sang answered that they would like to make profits on eco-friendly vehicles by 2020.