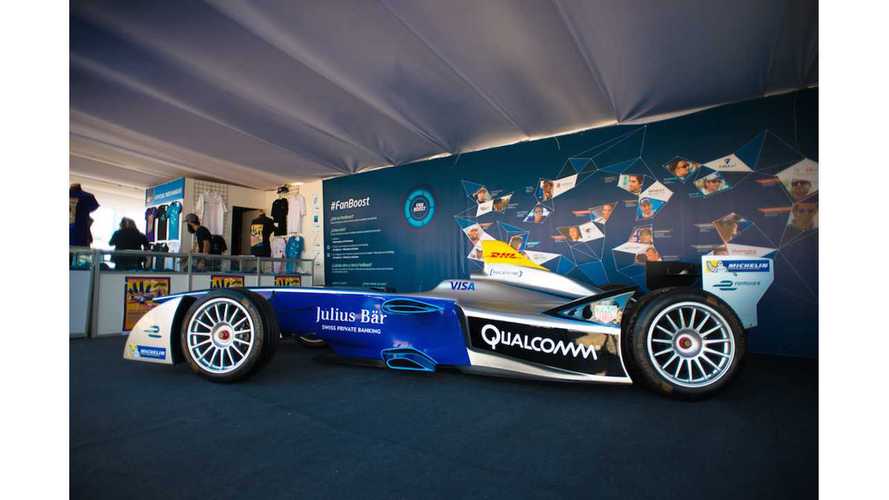 The FIA Formula E Championship is preparing for the third season - 2016-17, which begin on October 9 in Hong Kong.  (Watch highlights of the 2nd season finale that just wrapped up in London here)

There still will be 10 teams - with two drivers and two cars per driver (total four cars per team).

However, the number of powertrain constructors increases to 9 and there is five new cities in the significantly extended racing calendar, now with 14 rounds.

"Eight of the 10 teams have been involved right from the very beginning of the world’s first fully-electric single-seater series, even if some have undergone a name change since then.

The new entries come courtesy of Jaguar, the company choosing Formula E to mark its return to motorsport after an absence of over a decade, and the Chinese Techeetah team, that took over Team Aguri’s entry and is owned by China Media Capital, a public equity and venture capital firm based in Shanghai. Another new name is that of Faraday Future, an advanced mobility company with headquarters in Silicon Valley and Southern California (USA), which has entered into a new technological partnership with Dragon Racing."

The 10 teams entered are:

Also announced today are the names of the nine constructors whose powertrains have been homologated for season three (Manufacturer/Car model):

The new calendar features 14 races in 12 cities. Canada nets two Formula E rounds in Montreal, and two rounds are also reserved for New York, while there is no sign of London (at least for now) where in previous seasons two rounds were held (Brexit or something?).

"The calendar features 14 races, to be staged in 12 of the world’s leading cities, with double-headers in Montreal and New York. In addition to the ePrix, there will be a special event, the FIA Electric Mobility Forum, which will take place in Las Vegas on January 7."

“Formula E is all about showcasing fully-electric racing together with the most iconic landmarks in the world - and the calendar for next season certainly matches our ambitions. It’s fantastic to be able to bring Formula E to new markets, but more importantly to new fans. It will be great to finish the third season in New York, pending the approval of all the relevant stakeholders. The growth and interest in the sport has been on an upward trend since the very beginning, and I’m sure that the third season of the FIA Formula E Championship will once again prove to be a thrilling spectacle.”

“Today and tomorrow the finale of the second season of the FIA Formula E Championship takes place in London and already, the third season promises to be even more exciting. It will tackle a schedule that takes it to some of the most beautiful cities on no fewer than four continents, starting in Hong Kong and finishing in New York. It’s been less than two years since Formula E made its debut in Beijing and today it has staked its claim to being one of the most interesting and innovative championships on the current motorsport scene at a global level, which was not something that could have been taken for granted when it first began. More than any other, this championship brings together the two pillars on which the FIA is based, namely sport and mobility. It is also an amazing platform for the promotion of a new model for sustainable mobility, bringing a new form of motorsport to the heart of cities.”

Hat tip to Maciej B!