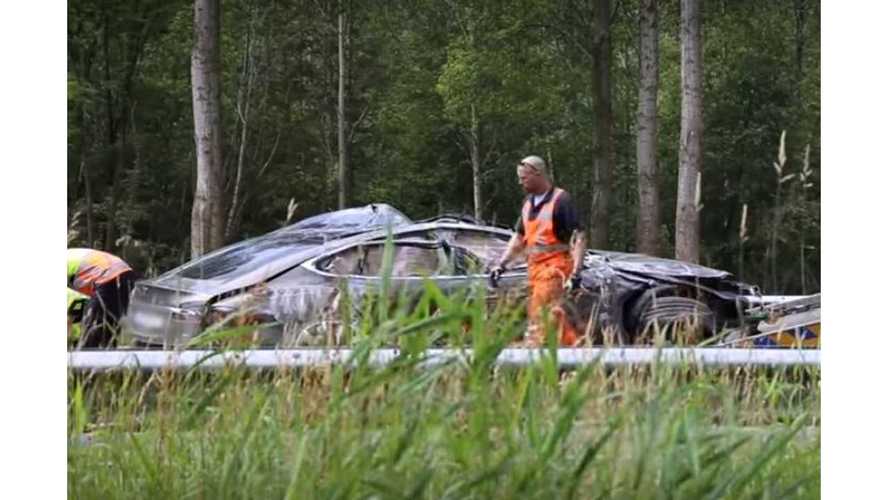 Tesla Model S Crash On A2 Highway In The Netherlands. Only Minor Injuries Reported.

Recently, reports of a Tesla Model S crash with a truck in the Netherlands showed what appeared to be devastating damages. The car was severely smashed from end to end and obviously not drivable. Fortunately, the driver and his young son were okay.

A Closer Look At The Tesla Model S Crash

No other cars were reported to be involved in the incident, and the driver of the truck wasn't injured. The truck was able to be safely driven away afterward.

It is uncommon for a car like the Tesla Model S to rollover. This is due to the heavy battery beneath the car that proportions weight dispersion fairly evenly. The center of gravity is very low. The NHTSA has granted the vehicle 5-star crash test ratings partly due to this.

The car rolled over two or more times and the airbags had possibly rendered the driver temporarily unconscious, or at least unaware of all details. Immediately following the crash, his son seemed fine and said:

“What is happening, daddy?"

The boy grabbed his cellphone and said:

The driver was able to open the driver's side door and exit the vehicle and also retrieve his son 8-year-old son.

At the hospital, both were considered to be free of any major injuries. The driver needed a few stitches on an elbow wound, and the son sustained some minor bruises.

The driver, from Stockholm, Sweden, has since posted an account of the incident on the Tesla Club Sweden forum, under the name Boreno. His post includes pictures, and much more detailed insight into the crash from his firsthand perspective. He is very thankful for the safety of the Tesla vehicle and makes that clear multiple times in his post.

Check out the video footage from after the crash: