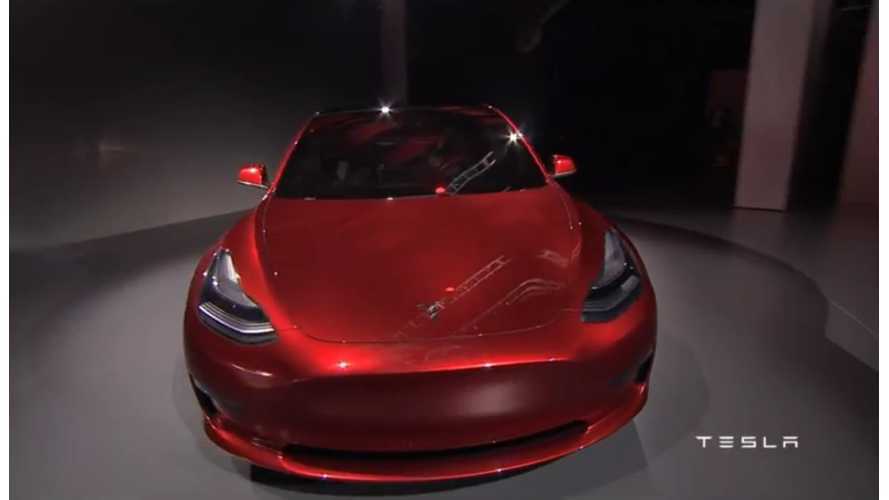 And most importantly, it did not disappoint.  Tesla delivered on all counts promised, and then some.

With a sleek and familiar style to everyone who is acquainted with the Model S, X (and even the Roadster platform), the Model 3 continues in that same style, and it does it with "at least an EPA 215 miles" of range.  (And no, there was not any battery capacity/kWh specs mentioned)

The Tesla CEO was also quick to point out that the long-promised price-point of $35,000 was also still in play, thanking those in attendance for their support in buying the Model S and Model X in the past - a deed which Mr. Musk says helped fund the company get to a point where it was able to deliver the lower costing Model 3 to the wider public.

First Look At The Tesla Model 3!

The window for first deliveries stay consistent, with the CEO stating the end of 2017 is still in play.

And as for other better options (petrol or electric) available from other car companies at that point?  Musk says there won't be any.

Foreshadowed earlier by the company, not everything was revealed in "part 1" of the launch, but we do know that the base car will do 0 to 60 mph in "less than" 6 seconds.  As for other, sportier versions, there will be some - and they will go "much faster".

The reason for not revealing all the premium features is likely due to the fact that the Model 3 is some ~21 months away from first deliveries, and Tesla would like to sell as many Model S sedans as it can in the meantime...an announcement of a sub 4 second Model 3 today would only serve to damage the Model S sales in the interim.

All cars will also have Supercharging as standard, of which Musk says the company will double the amount of Supercharger by the time the Model 3 launches - more than ~7,200 points, while "Destination" charge points will quadruple.

Perhaps in a little dig to the only (as yet) announced competition to the Tesla Model 3 - the Chevrolet Bolt EV, Elon Musk stated that the Model 3 seated 5 passengers comfortable, noting that "comfortably is the important part here".

Taking Off In A Model 3!

Right around midnight (eastern time), Tesla announced that they had taken 115,000 deposit reservations at company stores worldwide - a number higher than most total estimate for the Model 3 for the entire upcoming month.

Update: About 2 hours after start of the Model 3 debut, the reservation tally totalled more than ~150,000 thanks to company's live reservation tracker.

Shortly after the event Tesla opened their "Model 3" portal on its webpage, which doesn't offer much in the way of information, but does allow one a place to continue to put down a deposit reservation on Tesla's hot new offering.