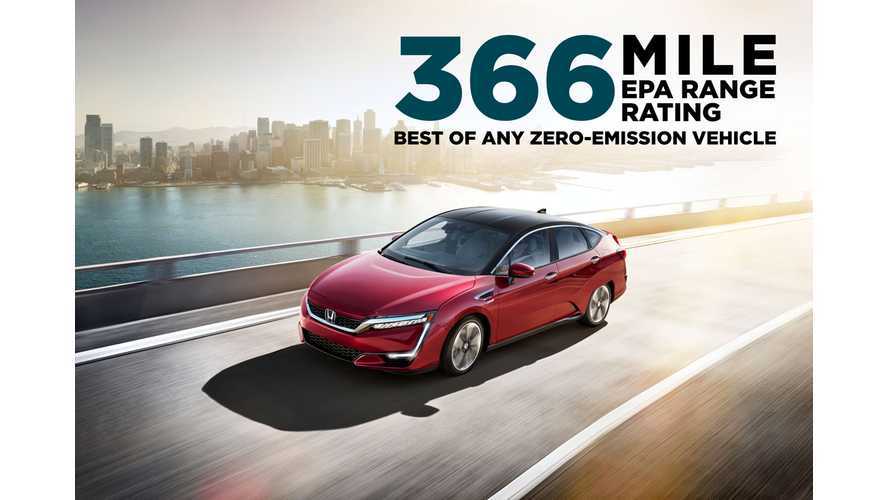 Honda announced that its hydrogen flagship, the Clarity Fuel Cell, was recently rated by EPA at 366 miles (589km) of range.

The Japanese manufacturer took the opportunity to stress that the 366 miles is the "best range rating of any electric vehicle without a combustion engine", while a Honda VP on the announcement added, "the zero-emissions family road trip is no longer science fiction".

...and yes, we cringed a bit ourselves to hear those statements.

Sales of the Honda Clarity Fuel Cell are to begin later this year in both U.S. and Europe, but we expect limited deliveries.

In U.S. specifically, Honda's program reminds us a lot of Toyota's, as the company will begin with "retail leasing to customers through its expanded network of 12 approved fuel cell vehicle dealerships located in select California markets (six dealerships in Southern California, five in the Bay Area and one in Sacramento)".

The Clarity Fuel Cell is the first fuel cell car to house the entire drivetrain under the bonnet of the car. Honda has reduced the size of the fuel cell stack by 33 percent whilst increasing power density by 60 percent, compared to the Honda FCX Clarity. Thanks to the compact fuel cell stack and integrated powertrain, Honda’s Clarity Fuel Cell is able to offer a more spacious cabin with seating for five people.

In Europe, Honda will be introducing the Clarity Fuel Cell to a limited number of European markets through the HyFIVE program to promote the development, use and viability of a hydrogen refuelling infrastructure. Together with industry partners, Honda is looking to gather real world user experiences of fuel cell vehicles and the use of hydrogen refuelling stations. The first units of the Clarity Fuel Cell will be arriving in Europe before the end of the year."

"Not only does the Clarity Fuel Cell fit five passengers and refuel in three to five minutes, it offers customers a driving range on par with gasoline-powered cars. The Clarity leads the pack with a 366 mile driving range rating, and with a growing network of hydrogen stations and fast fueling time, the zero-emissions family road trip is no longer science fiction."