Toyota Mirai To Launch In Norway, Sweden & The Netherlands Later This Year 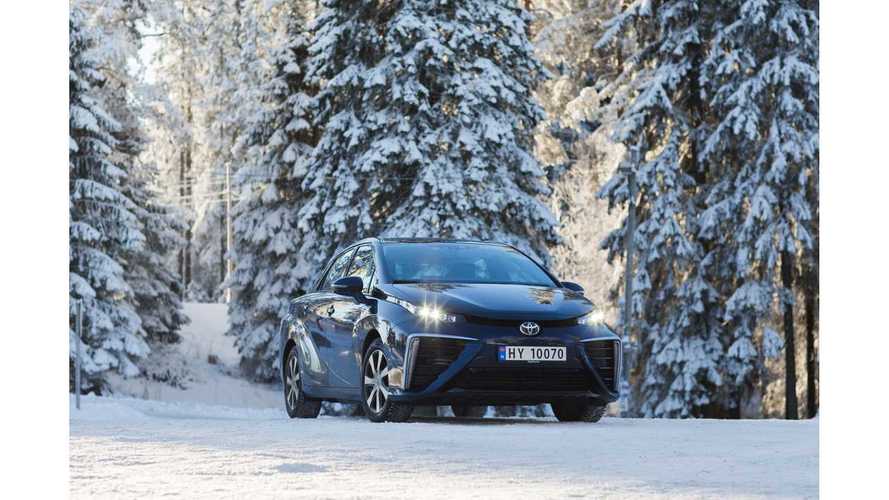 Toyota announced expansion of the hydrogen fuel cell Mirai's availability into Sweden and Norway, as well as to the Netherlands later this year.

The Japanese FCV was already launched in UK, Germany, Denmark (in 2015) and in Belgium this year.

The Mirai isn't afraid of the cold according to Toyota, and the introduction will be supported by new hydrogen refueling stations.

In Norway there is already 5 hydrogen stations - hydrogen providers HyOP and Uno-x have committed to install more than 20 additional (however they are giving themselves a lot of time to complete the assignment - by 2020).

In Norway the launch comes at a time when on top of the 5 existing hydrogen stations in the east of the country, two local hydrogen providers (HyOP and Uno-x) have committed to add more than 20 hydrogen stations across the country by 2020. The hydrogen stations are also expected to be a priority in the 2018-2029 National Transport Plan that comes with additional funding. Toyota customers can enjoy the same benefits of electric vehicles, i.e. VAT and tax exemptions on purchase, access to bus lanes and free toll.

Toyota Norway PR Manager Espen Olsen: “This is an important milestone for Toyota Norway. We believe this is the start of something big, and we believe that this technology will play a key role in cutting emissions from Norwegian road transport, thus helping the country to achieve its climate targets”. Ahead of the launch the Toyota Mirai has been extensively tested on Norwegian roads and the car has passed all tests with flying colours. The Toyota Mirai has proven to successfully cope with the typical winter cold in Norway. “The cabin warms up very fast thanks to the heat produced as a by-product by the fuel cells, with no impact on the range of the car”, adds Mr Olsen.

100% Green hydrogen Similar to neighbouring Norway, Sweden already has a number of hydrogen stations in cities such as Stockholm, Gothenburg and Malmö, with more in the pipeline to open later this year (Mariestad and an additional station in the capital Stockholm). In Sweden hydrogen can easily be sourced as it is locally produced 100% based on renewable energy, just like in Denmark. Toyota Sweden PR Manager Bengt Dalström: “We see the introduction of the Toyota Mirai as a way to accelerate the development of hydrogen infrastructure in Sweden.”