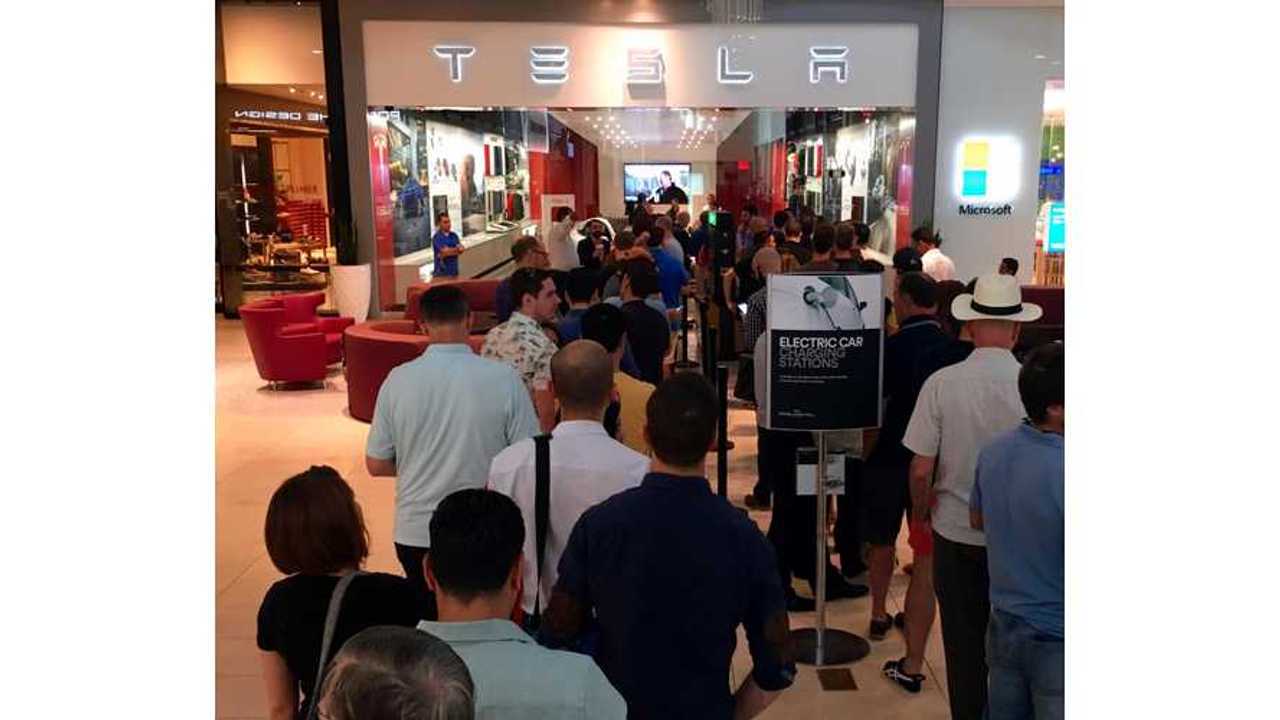 As the much anticipated unveiling of the Tesla Model 3 is mere hours away, impressive lines are forming at Tesla store locations around the world.

It was reported 2 days ago that a single buyer had already started the line in Australia, 48 hours before the dealership doors would open. Another similar story was reported in Vancouver.

Photos and videos of such lines and evidence of camp outs from InsideEVs readers (an staffers alike) are coming in quicker than we can post them. We've posted an ever-growing collection of photos, stories & videos below. Enjoy!

InsideEVs' Alex Wai got in the line early at Tesla's flagship store in Hong Kong (pictured below), reporting that "Many new customers" where present, and that even "the first few in the queue are non owners"

InsideEVs own MTN Ranger: "Here in Raleigh, NC, we have over 100 people in line as of 8:51. The first half dozen people arrived around 5pm and camped out."

IEV reader, Scott Franco reports more than 500 people in line at Tesla's Sunnyvale, CA location (below). Adding the store was allowing 2 deposits per customer...and that the line was so long, some bailed out, perhaps to come back when things had calmed down some.

Jukka Kukkonen (of whom some of you might recognize form PlugInConnect), shared with us his experience in Minneapolis, saying he was the 150th deposit reservation taken, out of an estimated 500.

The Line Stretches Out In Minneapolis (Via Jukka K)

In Indianapolis, InsideEVs reader Rich L send us this shot of some 200 would-be Tesla Model 3 owners (most of whom seem to be men) taking over a food court at the local mall waiting to get into Tesla's boutique store.

Inside With 3 Lines For Reservations - Image Credit: InsideEVs/ MTN Ranger

Martin (InsideEVs community post): I was #4 of Japan. Been here by coincidence but it might be a time zone advantage (almost the best) :) Cut a short clip about the first people putting there names down

First In Line In OZ

First In Line In Vancouver

Over 200 In Line In Montreal In The Rain