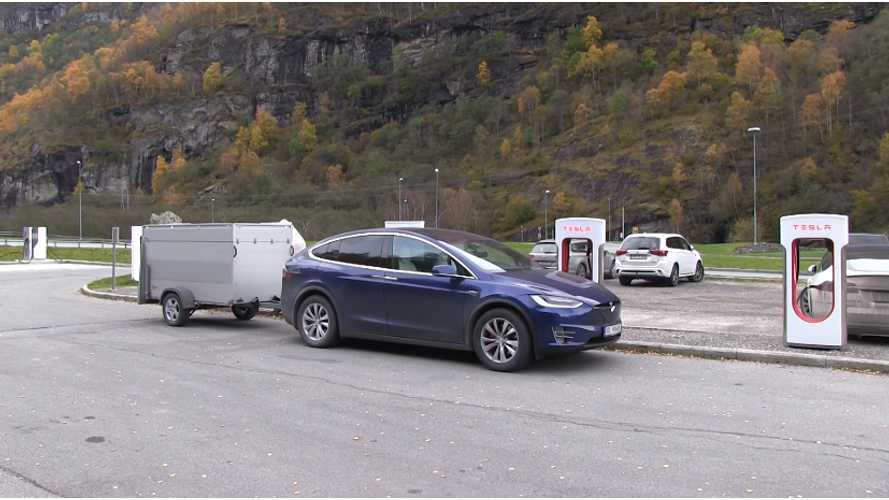 The topic of optimal speed when hauling a trailer with an electric vehicle can be a little bit tricky because it's important not only to factor in what is the size and weight of the trailer, but also the route distance/dynamics to be traversed (including elevation), and also which charging options will be available along the way.

Here, Bjørn Nyland shares his insights about the energy consumption of Tesla Model X when hauling a medium-size trailer and gives us a real good look at all the "math" involved in getting the most out of an extended drive with a load in tow.

Bjørn explains many scenarios in the video, but we have also summarized the numbers below as a quick reference.

Consumption, optimal speed and range when pulling a trailer

I discuss consumption with my trailer at different speeds and talk about the optimal speed when traveling between superchargers. I also show some extreme cases where you have to charge very long and what will happen if there are more superchargers on the way.

But if you need to charge along the route, then it becomes a question of whether it's better to drive faster (and then charge more) or drive slower (and charge less).

The conclusion is that if the Supercharger will be available after 100 km (62 miles), then it's a lot better to drive faster:

The advantage of driving faster obviously decreases if there will only be conventional DC fast charging/CHAdeMO options available (~40 kW average):

Slower charging, such as 16.5 kW isn't advised. But if it's the only option, the optimum speed will be lower in order to conserve energy and travel further (but really there not much difference compared to higher speeds - so its more of a driver preference situation).

If the route is 200 km (125 miles) there is not much difference between speeds, but higher speeds does still translate to a shorter total time  in total (driving & charging at Supercharger).

That said, big changes in elevation on a 200 km leg indicate a sweet spot at 80 km/h (50 mph), on shorter distances 90 km/h (56 mph) will be still better when using Tesla's Supercharging network:

The final insight from Bjørn, that we totally agree with, is to always charge more (5-10%) than will be needed as there can always been unforeseen increases of energy consumption during a long trip.