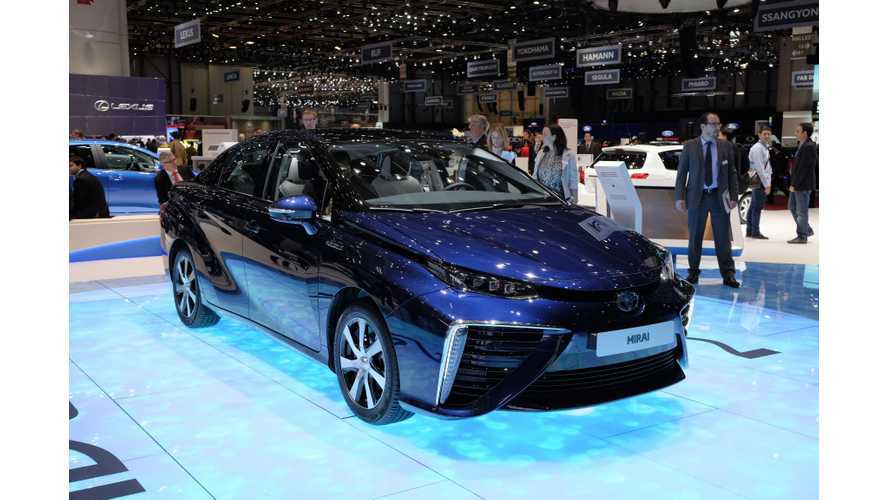 Just few days after Hyundai announced a record distance traveled by hydrogen fuel cell car (in its ix35) in the UK (400 miles on single tank & 6,096 miles over six days), Toyota raises the bar trying to ecourage us that FCV technology is ready for heavy duty use cycle.

It would seem that fuel cell vehicle makers have decided the battlefield of choice to compete against plug-in technology is emission free range over time.

Test were conducted under various condintions, including temperatures of -20°C and according to press release Toyota Mirai achived 100% reliability.

"Toyota’s new hydrogen fuel cell car, the Mirai, has successfully completed its 100,000 kilometre European road test. The test started on 21st September 2015 and finished on 10th February 2016. Every day for 107 days, the Mirai was on the road for 16 hours. During its 100,000 kilometre journey, the car was refuelled nearly 400 times with just over 1000 kg of hydrogen, its tyres changed twice, and its front brake pads replaced. No mechanical breakdowns were reported.

Responsibility for the road test was given to KJ Tech Services GmbH of Hamburg. Toyota specified the total distance the Mirai should cover, as well as the amount of time spent on different types of road: in the city, on rural roads, on motorways, and on German autobahns with no speed limit. To meet these specifications, KJ Tech Services carefully calculated a single route in and around Hamburg, and organised a team of eight drivers working in two shifts per day, six days a week."

"Toyota also asked the eight drivers for their feedback on the Mirai driving experience. They reported that the interior of the Mirai was comfortable and attractive, and remarked on the luxurious leather seats and steering wheel. It was also spacious; even the tallest driver said there was plenty of legroom. It handled well on curves, was easy to manoeuvre, and the steering was responsive. Acceleration was smooth with no jerking, and the drivers were impressed by the car’s power, which they said was immediately available when necessary, for example to overtake or surge away from traffic lights.

The drivers themselves were responsible for filling the Mirai’s tanks with hydrogen. They had all received a short explanation of how to do this, but as there is little difference between filling up a hydrogen car and a conventional diesel or gasoline car, training was minimal. The drivers found refuelling a very easy and safe process. They recognised a major advantage of the Mirai over other electric vehicles. Instead of having to recharge overnight – and therefore be out of action – the Mirai could be refuelled in just three minutes and was immediately ready to drive."

“The Mirai performed excellently with no mechanical breakdowns. The fuel cell operated with 100% reliability. This was also the case during a week in which the outside temperature dropped to minus 20 degrees Centigrade, when no problems with cold starts were reported.”