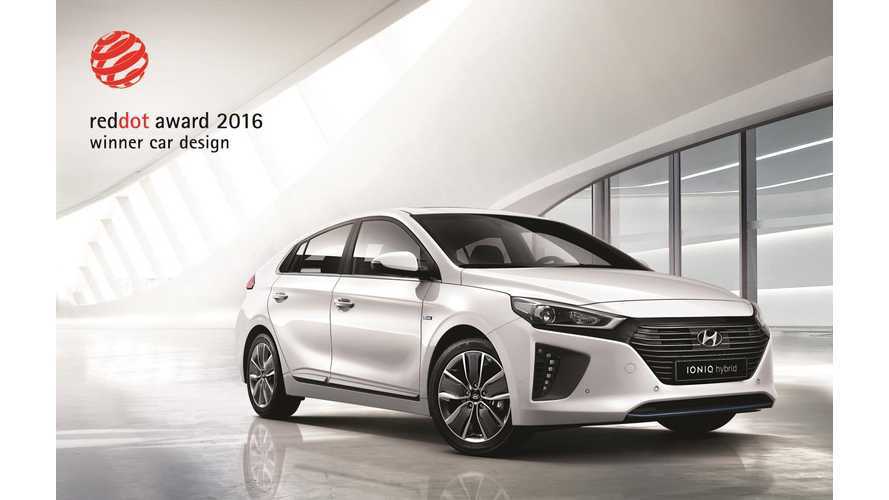 This year Hyundai introduced it IONIQ lineup of cars. And after just a few major auto shows, it has been fairly warmly received; in fact, it just won the prestigious 2016 Red Dot Design Award.

"Hyundai Motor was recognized by Red Dot jury for presenting an evolutionary design, through a refined, sophisticated form, and for its application of new eco-friendly materials. IONIQ presents new possibilities for Hyundai Motor’s future mobility styling, with its purified shape led by aerodynamics, and its refined, clean lines and surfaces enhancing its coupe-like silhouette."

The IONIQ will be available in three versions (Hybrid, Electric and Plug-In Hybrid). Each versions stands out details.

"Hyundai Motor has once again received international acclaim in the prestigious Red Dot Design Awards. The groundbreaking new IONIQ model has been recognized for its outstanding design in the coveted Vehicle category, becoming the sixth Hyundai car to receive a Red Dot title in the last three years.

The award acknowledges the future-orientated design of the newest addition to Hyundai Motor’s car line-up. IONIQ is Hyundai Motor’s first dedicated eco-friendly model and is an important milestone in its sustainability strategy, with this latest award bringing further global recognition for its forward-looking design philosophy."

"Drawing on a jury of 38 experts from 25 countries - all high profile designers, professors and journalists - the Red Dot Design Award is recognized globally as one of the most sought-after marks for quality design. The 2016 contest attracted 5,214 entries from 57 countries, making the Red Dot Award the largest and most international product competition in the world."