When Will Teslas Stop Crashing Into Buildings? 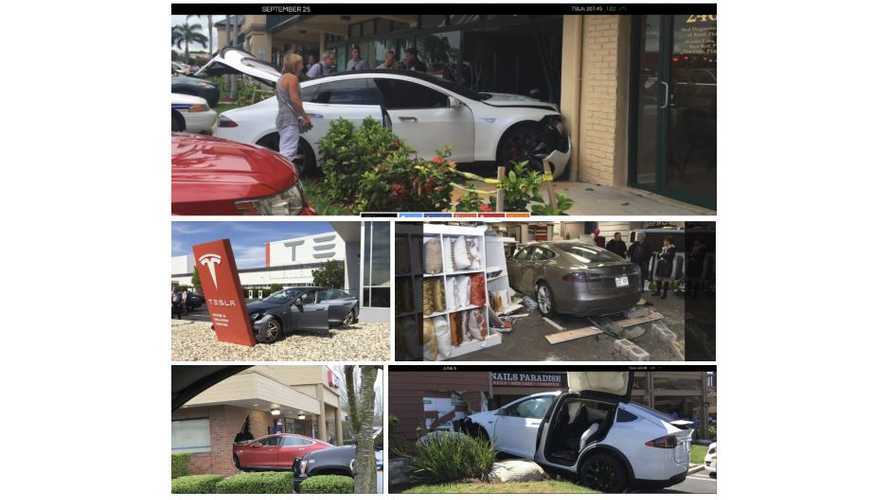 WHEN WILL CARS STOP HITTING BUILDINGS?

How long before we stop seeing embarrassing scenes like these? Does the latest Tesla hardware/software update prevent this from happening? What level of machine intelligence is required for walls to be recognized as impassable? Seems it should be the first line of programming code in any “smart” car. Here’s how it should be entered:

“See that big flat thing in front of you? That’s a wall. Yes, it might have some transparent rectangles in it. In fact, the whole thing might be transparent. But it’s still a wall, and you cannot drive through it. Even if the driver has his foot in the accelerator, guess what, you’re stopping anyway. Ditto signage. There’s no circumstance under which it’s acceptable to smash into these things. Do we understand each other?”

Editor's Note:  A Tesla Model S 70D also took flight, jumped some bushes, on top of a new Mercedes, then into a dealership on Thursday as well (story & video here)

We all know that cars of all brands drive into buildings. We see this on the local TV news almost daily. TeslaMondo has no reason to believe Teslas are more prone to these incidents than any other car.

Is it possible that the combination of an unusual “ignition” sequence (just press the brakes), unusual “gear” selector (just tap a steering wheel stalk) and unusual silence when pressing the “gas” pedal could contribute to driver confusion? Is Tesla foisting new tricks upon old dogs?

Let’s hope the rise of machine learning brings the demise of these parking lot disasters. They’re long overdue for eradication, and Tesla should be the first brand to eradicate them. “Sudden unintended acceleration” is an American term for a conspicuously American phenomenon. The Audi fiasco of the 80s and Toyota fiasco of 2009-2011 never left our shores despite worldwide use of the same products. So it’s incumbent upon an American company to erase the term from the vernacular.

Then again, America did invent the drive-thru. Maybe this is in our blood. Oh dear.