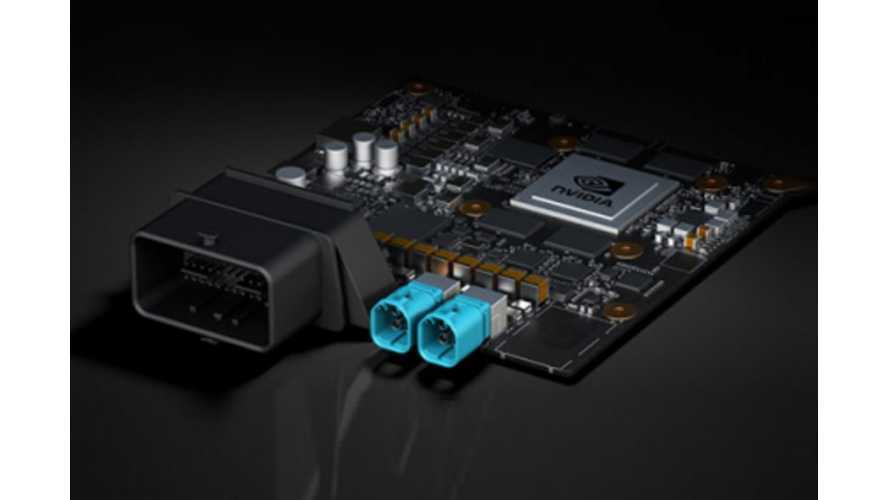 Heart of the Tesla's new autonomous driving hardware, that some day will enable fully self-driving cars, is the latest NVIDIA DRIVE PX 2 AI computing platform (see live presentation of it in action below).

NVIDIA DRIVE™ PX 2 is the open AI car computing platform that enables automakers and their tier 1 suppliers to accelerate production of automated and autonomous vehicles. It scales from a palm-sized, energy efficient module for AutoCruise capabilities, to a powerful AI supercomputer capable of autonomous driving.

For NVIDIA, DRIVE PX 2 is now in full production as Tesla requires thousands of units each month for manufacturing of the Model S and Model X, soon that number could be tens of thousands per month when the Model 3 assembly starts later next year.

Tesla Motors has announced that all Tesla vehicles — Model S, Model X, and the upcoming Model 3 — will now be equipped with an on-board “supercomputer” that can provide full self-driving capability.

The computer delivers more than 40 times the processing power of the previous system. It runs a Tesla-developed neural net for vision, sonar, and radar processing.

This in-vehicle supercomputer is powered by the NVIDIA DRIVE PX 2 AI computing platform.

NVIDIA DRIVE PX 2 is an end-to-end AI computing system that uses groundbreaking approaches in deep learning to perceive and understand the car’s surroundings.

Our deep learning platform is open and lets carmakers first train their own deep neural networks on GPU supercomputers. Once loaded into the car, it processes the networks at high speed to provide the real-time, accurate response required for autonomous driving.

DRIVE PX 2 is in full production.