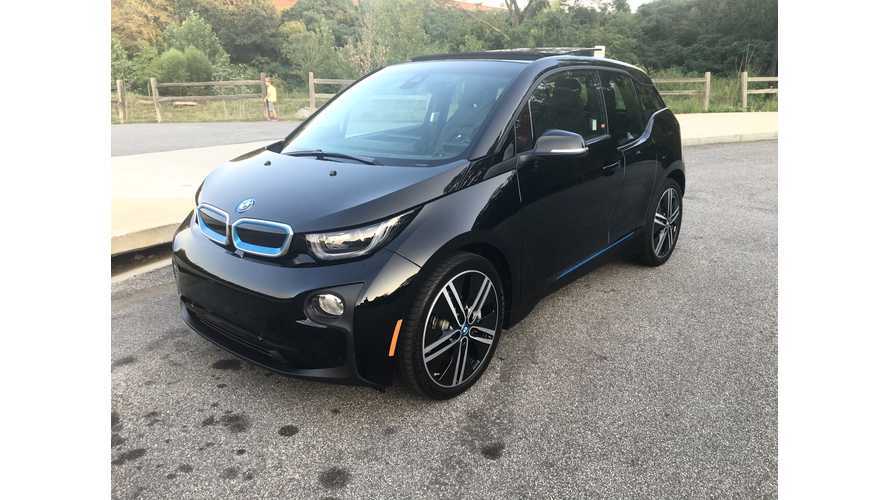 If you have been the owner/lessee of a vehicle for 2 years, many ask why would you commit to the same vehicle for the next two years? Simple: I love it!

I first drove BMW i3 during 2014 Drive Electric Weather Channel Interview (watch video clip with Michael below) and was impressed. It changed my perception of the car being clumsy and having weird skinny tires, the regular concerns people have with i3s. But after putting in a car seat and taking my kids around, I was sold!

This summer my local dealer called me to come over and configure one of the first 2017s BEV allocation with a 33kWh battery pack and I jumped on the opportunity. Few months later (end of August to be exact) the car arrived in Atlanta and after transferring driver's profiles I was able to enjoy what seemed to be the exact same car at first as my 2014, but that was only at first.

Before we get into why the 2017 is different, lets list a few visual changes:

What would ask me the biggest the biggest change I am enjoying on 2017? Of course the range. The new 114 miles is actually super conservative and I have seen GOM (guess-o-meter) to be 125 and even 140 at times.

Is the mileage enough? Yes, in the metro environment it is plenty and I find myself having extra charge upon returning home more often than before. Charging of course is now closer to 5 hours compared to about 3 before on a 32A circuit.

But the second most important change for me is vehicles weight. Yes you are not mistaken: With the added weight i3 feels a lot more stable on the highway, it is not as jerky and actually corners a lot better. Of course now we have about 200 lbs added with the sunroof at the top, but the higher density battery is providing the extra weight and overall improving the comfort of the ride. Rear tires now have a higher weight rating to cope with the 33kWh battery.

The darker wood is actually a welcome change. I noticed after driving for over a month how much better it blends with the overall interior and is not as distracting as before.

Sunroof has arrived for the 2017 edition

The T shaped sunroof (it is actually one piece of glass, but has a middle bar for reinforcement) is super cool! It adds a lot of light to the interior and actually makes it look a lot bigger. My daughter enjoys having her own sunshade on the passenger's side for the sunroof that is independent of the driver's.

For a more detailed look, I removed the rear eMachine cover and noticed no significant changes except a different wiring patter. The motor bolts look new and that is a welcomed sign. Perhaps there are additional changes in the REx model, but only opted for BEV model.

Regarding some improvements that can be made:

Another look at the new roof

I am sad that the 2017 model did not inherit the same updated iDrive experience as the ICE or iPerformance cousins but perhaps that may come in the future (touchscreen, new UI). The tech package has a such a beautiful screen and newer iDrive graphics would have looked amazing. But Over The Air (OTA) updates are still a future dream for BMWs overall and we might not see the new UI on i3 until 2018 year.

My only critique of the i3 and BMW NA is the inclusion of the ash tray cup with the car. I do not smoke. I do not like explaining to my kids what it is and frankly I do not think majority of i3 owners smoke either. If one wants to smoke, they can order a smoker's package but I would rather put the money spent on the ash tray cup toward future iMobility research.

If currently have a 2 year lease or Owner's Choice on your 2014 model and thinking about renewing it with 2017 model, you will not be disappointed in your decision to get the new i3.

From a financing stand point, please remember the Owner's Choice financing option with Flex (where you deferred the payment of $7500 Federal Tax Credit to BMW Financial Service) is now dead, so if you are thinking about doing OC vs. a lease a large downpayment strategy may be required. As we progress towards 2017 model year the residuals for the leases have been improving and will help with your monthly payment.

2017 BMW i3 is a welcomed refresh to an already great vehicle and I am sure you will enjoy it as well!

Video Below: Michael and The Weather Channel talk EVs for National Drive Electric Week 2014 (from 1:10)